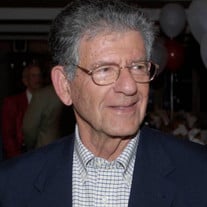 Aaron Roos Scharff, Jr (Ronnie) Aaron (Ronnie) Scharff, Jr. beloved husband of Jane Coltrain Scharff of 42 years, father of 4 boys, grandfather of 9, passed away at home at the age of 88 after living a wonderful life of great adventures. He was an avid photographer, sailor, pilot, scuba-diver, and voracious reader of history and biographies. Aaron was born on Sept. 10, 1931 in New Orleans to loving parents Aaron and Annette Perley Scharff and proud sister, Joan. The family soon moved to Memphis, where his father became the president of Lowenstein’s Dept. Stores with the family residing in Chickasaw Gardens. Aaron attended lower school at Pentecost Garrison in Memphis, high school at Phillips Exeter Academy (NH) and received a B.A. in History at Yale University. After graduation Aaron attended the Navy’s OCS in Newport, RI. Aaron married Judy Schwarz Scharff of blessed memory, on June 11, 1955 and had 4 boys, Ron (Darcy), of St. Louis, Lewis (Laury) of Baltimore, and twins Jon (Suzanne) and Richard (Mary) of Memphis. Aaron married Jane in 1977 who helped guide the rambunctious twins through high school barely surviving driver’s education. Aaron was the proud grandparent of 9 loving adoring grandchildren, Josh (Israel), Adam (Baltimore), Madeline (Portland ME), Micah (UK), Jimmy (Baltimore), Frederick (Memphis), Julia (Memphis), David (Memphis) and Elana (Memphis). Aaron leaves behind his beloved 99-year old sister, Joan Weil Oppenheim of NOLA, along with her daughter and son, Mary Ann Sternberg (Baton Rouge) and Walter Weil (NOLA). Aaron’s professional career started with serving as a Naval Officer, then followed by the McDonald’s corporation and residential development. After retiring Aaron traveled extensively abroad to live the culture and understand the history of people, but truly loved making friends around the world during his travels. He never knew a stranger which tested his children and grandchildren’s patience while he chatted away anywhere. with anyone, about anything. As a Navy pilot then instructor in Pensacola, Fl. he excelled at the technical requirements of flight and was thrilled by the sheer power of planes, eventually moving to an A-4 squadron commander out of Millington, TN. Upon retiring from the Navy reserve, he bought a small plane just to remain airborne. This love for adventure led him to take up sailing, which took him from the coast of Florida to the rocky coast of his newly adopted state Maine; and he then discovered scuba diving, which led him to explore marine life from Micronesia to the Great Barrier Reef. Aaron’s daily routines included: NOLA coffee with chicory, news, email catch up, morning tennis or other outdoor activities to stay active during his 88 plus years. If his kids or grandchildren were around there was often a friendly competitive game of cribbage. Aaron’s warm, friendly, subtle demeanor and sincerity were widely felt and acknowledged among friends. He was an active member of a wide variety of social and community organizations: Kiwanis and Rotary clubs, Exeter, Yale & Navy alumni reunions. One of his biggest joys was joining his college suitemates for numerous mini-reunions around the country. Jane and Aaron traveled the world, kept two homes in Memphis and Boothbay Harbor, Maine. Many of their happiest moments were spent welcoming and entertaining family and friends at their home or on their sailboat Capital Gains Too docked on Southport Island. Aaron enjoyed serving as Commodore of the Boothbay Harbor Yacht Club. Over the past year many sunsets were enjoyed having cocktails with family on the rocks of Ocean Point. Due to the pandemic and social restrictions there will be a private burial service for the immediate family. In lieu of flowers, the family asks that you donate to the Judy Scharff Fund at the Community Foundation of Memphis, Crossroads Hospice Charitable Foundation or a charity of your choice.

Aaron Roos Scharff, Jr (Ronnie) Aaron (Ronnie) Scharff, Jr. beloved husband of Jane Coltrain Scharff of 42 years, father of 4 boys, grandfather of 9, passed away at home at the age of 88 after living a wonderful life of great adventures. He... View Obituary & Service Information

The family of Aaron (Ronnie) Roos Scharff Jr. created this Life Tributes page to make it easy to share your memories.

Send flowers to the Scharff family.