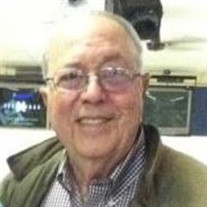 Dr. Albert Samuel Burson, beloved husband, father and grandfather, died peacefully at the age of 87 at his home in Memphis, TN. He passed away in the early morning hours on Sunday, May 31st, with his loving family by his side. A native Memphian, Dr. Burson was the son of Harry and Rebecca (Steinberg) Burson. He graduated from Central High School in 1951 and completed his undergraduate degree at Memphis State University. He earned his Doctorate of Dental Surgery from the University of Tennessee Center for Health Sciences. Dr. Burson practiced general dentistry in Ridgely, TN for 41 years. He was loved by his patients, making them all feel comfortable with his kind and gentle demeanor. He was the sole dentist in Lake County and was responsible for establishing fluoride use in its water supply. While living and practicing in Ridgely, he was very active in the community serving as President of the Rotary Club and Chairman of the Planning Commission. He was recognized by the State of Tennessee and the Honorable Philip E Pinion (TN House of Representatives) for his indelible service to Ridgely and Lake County residents. He had an immense passion for building remote control airplanes and flying them in competitions where he won numerous trophies. He also flew Ultralight airplanes which then compelled him to get his pilot’s license. While enjoying flying his Cessna taildragger, he spent innumerable hours meticulously building a two-seater airplane. He also considered home improvement projects a hobby. His perfectionism and skill were evident in everything he built, including a deck, arbor, dry creek with a Japanese arch bridge, coy pond, and window boxes. He was also an avid gardener and golfer. Dr. Burson was preceded in death by the untimely passing of his beloved wife Frieda Salky Burson in 1979, his sister Betty Chalfin and his brother Leon Burson. He leaves his devoted wife, Deanna Shainberg Burson of 31 years, and his children Paula (Alan) Auerbach of Houston, TX, Karen (Carey) Mountcastle of Anderson, IN, and Brian Shainberg, David (Karen) Shainberg, and Marla Shainberg of Memphis. He also leaves his 6 adoring grandchildren Lexi and Madison Auerbach, Grant and Claire Mountcastle, and Margo and Abby Shainberg. A private graveside burial was held with immediate family at the Temple Israel Cemetery on June 1st. The family requests that donations in Dr. Burson’s memory be made to either Temple Israel (timemphis.org) or a charity of the donor’s choice.

Dr. Albert Samuel Burson, beloved husband, father and grandfather, died peacefully at the age of 87 at his home in Memphis, TN. He passed away in the early morning hours on Sunday, May 31st, with his loving family by his side. A native Memphian,... View Obituary & Service Information

The family of Dr. Albert Samuel Burson created this Life Tributes page to make it easy to share your memories.

Send flowers to the Burson family.