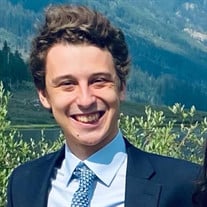 Andrew Talbot Rainer, Jr. “Drew” died on October 3, 2021 at his home in Memphis, TN. Drew was the oldest of 4 siblings, born on July 4,1999. He was a senior at Rhodes College, where he was a Clarence Day Scholar majoring in English with a minor in Music. He was part of the Rhodes Jazz Ensemble and the chaplain of Sigma Nu fraternity, where he was a brother. Prior to Rhodes, Drew graduated with honors from Christian Brothers High School, where he played trombone in the oldest high school band in America, and was a varsity wrestler, Drew was a voracious reader, and was awarded the Chad Eatherly Scholarship, “given to the Brother’s Boy who exemplifies our best graces: compassion, humor, wisdom, service, spirit and spiritedness…” From childhood, Drew was an accomplished musician, singer and lover of music, who as a very small boy volunteered to sing at Christmas mass at St. Peter Church, where he continued to serve as a cantor, soloist and duetist. He sang with the Memphis Boy Choir and played trombone in the CBHS Jazz band and with the pep band at football games. Drew also studied bass guitar, and greatly loved playing in his 80’s rock group, Belvedere, with his bandmates. Drew earned the rank of Eagle Scout with Boy Scout Troop 55, and in 2017 completed a 12 day, 85 mile trek at Philmont Scout Ranch in Cimarron, New Mexico with fellow Troop 55 scouts and troop leaders. Drew learned his love for his Catholic faith at St. Peter Catholic Church, where in addition to singing, he served at the altar, and was a devoted member of the high school youth group, known as “The Thing.” Drew was a loving son, brother, nephew, cousin and friend. He was a kind, cheerful, intelligent and outgoing young man, who was loved by his friends. He is survived by his mother and father, Keith and Andy Rainer, his sisters Nell and Mary, and his brother Robert. He also leaves behind his Aunt, Lesley Dillon (John), his uncles: Jim Rainer (Missy), Stephen Rainer (Debra) and Andrew Doggett (Nora), 11 first cousins, as well a very large extended family network too numerous to mention. Mass in celebration of Drew’s life will be at St. Peter Catholic Church on Friday, October 8 at 2:30PM. There will be a visitation in the St. Peter parish hall at 1:00PM, and a rosary prayed in the church at 2:00. The service can be streamed live at: https://boxcast.tv/view/drew-rainer-funeral-478870 A memorial fund has been established in Drew’s honor at Pinnacle Bank. Donations can be directed in person or by mail to the Drew Rainer Memorial Fund ℅ Pinnacle Bank 949 Shady Grove Road South, Suite 100, Memphis, TN 38120, or via GoFundMe at https://gofund.me/6f7a9536 Drew’s family asks that donations be made to this fund in lieu of flowers. JOHN 15:13 “GREATER LOVE HATH NO MAN THAN THIS, THAT A MAN LAY DOWN HIS LIFE FOR HIS FRIENDS”

The family of Andrew "Drew" Talbot Rainer Jr. created this Life Tributes page to make it easy to share your memories.

Send flowers to the Rainer family.