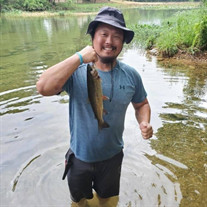 With deepest sorrow, we announce that Andrew William Kratzke, age 37, beloved son of William Paul Kratzke and Nancy Anne Mardis, brother to Lisa Hales Davis, Rachel Penn Kratzke, and Dimitriy Andreyevich Titov, father of Luke William Kratzke, favorite human of their dog, Meyer, family member to more, and fierce friend to everyone, passed away suddenly at his home in Memphis, TN on Sunday, September 27, 2020. The depth of this loss is immeasurable and the anguish unbearable. Anyone fortunate enough to have known and felt Andrew’s presence, no matter how briefly, has lost a bright shining light. Andrew’s career as an accomplished chef formally began at the College of Culinary Arts at Johnson and Wales University, Miami, although his passion was ignited long before with late-night dinners prepared in the kitchen in the house where he grew up. His career pursuits saw him as sushi chef and lead line cook at the world-renowned Nobu Miami and interning and mastering sauté station in Manhattan, NY at Cafe des Artistes. It eventually called him home in 2011, where he worked at an array of Memphis eateries, including a stint as executive chef at Napa Cafe. Perhaps his greatest and proudest achievement was becoming a father on March 31, 2014. Andrew was an Eagle Scout and an avid outdoorsman, whether recently foraging for chanterelle mushrooms, a passion he shared with William’s wife, Marina Yurievna Kratzke, or summiting the 14,005 foot Mount of the Holy Cross with his beloved Uncle Mike Hisey, also a leader in the Boy Scouts. From an early age, he loved to go fishing with family, friends, anyone wanting to tag along, sometimes with those not necessarily wanting to tag along, but would for his sake, such as his niece, Taylor Hales Davis, and nephew, Parker Hales Davis, and oftentimes, alone, finding peace in nature. Andrew was an animal lover, and in a world where he could be anything, he was kind. For every kindness he will be remembered for, there were dozens more he did quietly that people did not know about. Andrew tirelessly championed justice for his best friend, Troy Goode, who left behind a son, Ryan, only days younger than Luke and destined to grow up together, just as he and Troy did. Private services will be held on Saturday, October 10, 2020. Weather permitting, this will be outdoors, as Andrew would have loved, and socially distanced. In lieu of flowers, the family asks for donations to be made to Andrew’s gofundme, which will benefit his and his sister’s adoption agency, Holt International, the care and wellness of his dog, Meyer, and chiefly, to provide for his son’s future, which Andrew cannot be a part of.

The family of Andrew William Kratzke created this Life Tributes page to make it easy to share your memories.

With deepest sorrow, we announce that Andrew William Kratzke,...

Send flowers to the Kratzke family.