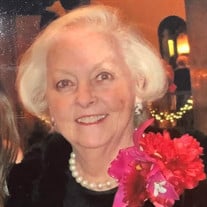 Anne Conway White Connell Anne Conway White Connell died peacefully in her home at Trezevant Manor Monday night, November 8. Although she battled a debilitating disease the last decade of her life, Anne never let the disease define her; rather she continued to focus on all of the positives life has to offer. All who knew Anne will remember her zeal for living life to the fullest, an attitude which she impressed upon every member of her family, whose lives and activities she was fully immersed in. Anne was also defined by her love for the Episcopal church, especially Calvary Episcopal Church and the National Cathedral. An extrovert with a life full of friends Anne did not simply watch the world pass by. Anne made sure to fill her days with all those things that make life worth living; call her up on any given day and she could be found studying Shakespeare, painting in her home studio, tending flowers in the garden, or cheerfully setting off on some “high adventure” with her grandchildren – like her multiple appearances staring as the grandmother in the Ballet Memphis Nutcracker dancing alongside her granddaughter Kate. Anne had a passion for teaching and learning, which combined with her love for the French language and culture led her to teach French for many years -- beginning at St. Georges Day School in Clarksdale, Mississippi; to serving as an associate Professor of French at LeMoyne Owen College; to organizing groups of children for “French camp” at her home over many summers. For many years she also led friends and family on tours of France. Anne was also an artist in her own right, which she passionately pursued through studies abroad in France and Italy, producing beloved oil paintings. She often found inspiration for her paintings from the time she spent in the garden, involving herself in many garden projects, including chairing the Grounds and Gardens Committee at Trezevant Manor. Anne joyfully engaged herself in the Trezevant community, creating dear friendships during the 13 years she lived there. To those who knew her, it is no surprise that Anne’s favorite flower was the sunflower, as her cheerful demeanor brought so much brightness and warmth to the lives of those around her. Anne was born on August 9, 1932, in Osceola, Arkansas. She attended Ward Belmont in Nashville, Sweet Briar College and graduated from the University of Mississippi with a BA in 1954. She raised her family in Clarksdale, Mississippi, later moving to Memphis in 1980. Anne then returned to her studies earning her PhD from the University of Mississippi in 1989. Anne is survived by her children, J Oscar Connell, Jr., Llewellyn Connell Hall (Josh), and Coleman Baugh Connell (Kate); six grandchildren, James Rogers Hall, III (Brokke), William Coleman Connell Hall, Llewellyn Richardson Hall, John Gilliland Humphreys, Alexander Matheson Humphreys and Katherine Pinkney Connell; and, two great grandchildren, James Rogers Hall, IV and Llewellyn Tate Hall. She is also survived by her sister, Llewellyn W. Bell. She is preceded in death by her mother and father Godfrey Llewellyn White and Jayne White Leech and two brothers, John White and Boyd White. A memorial service will be held at Calvary Episcopal Church on Friday November 12th at 2:00 pm. The family requests that in lieu of flowers memorials be made to M.D. Anderson Cancer Center, P O Box 4486, Houston, TX 77210 and Calvary Episcopal Church, 102 N Second, Memphis, TN 38103.

The family of Anne Conway White Connell created this Life Tributes page to make it easy to share your memories.

Send flowers to the Connell family.