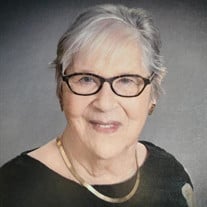 Anne Galloway Cowan, age 83, died peacefully in Memphis, Tennessee, on Saturday, June 11, 2022. Born March 18, 1939, in Glasgow, Scotland, Anne was brought up by Peter and Katie McPherson in Rowan Cottage, Glenlivet. She had a loving childhood with her siblings Cathie Hanratty, Francie Robinson, Helen Teasdale, and Angie Robertson. She attended high school at the Grey Nuns of the Sacred Heart, Queens Cross, Aberdeen where she graduated at the top of her class. She was among the first from her area to attend college. Anne attended the University of Aberdeen and earned a Master of Arts in French, Latin, and Psychology, and then became a schoolteacher in Aberdeen. While attending university, she met the love of her life, George. They married on July 11, 1964, in a church near her home in the Glenlivet area of Scotland, honeymooning in the Aran Islands, Ireland. They remained happily married into what would have been their 58th wedding anniversary next month. One year after they married, they moved to Philadelphia, Pennsylvania and bought a house in Ardmore, PA where she taught in a local school. During their time in Philadelphia, their three children, Scot, Katie and Marshall, were born. Anne and Marshall made the cover of the Philadelphia Enquirer after his birth, as she gave birth at home during a blizzard. They spent the next years living in Washington, D.C., San Francisco, and Augusta, GA. During this time, Anne excelled as a real estate agent at Crowell & Company in Augusta, GA, became President of the Augusta Women’s Board of Realtors, and Vice President of the Augusta Board of Realtors. In 1980, the family moved to Fort Leonard Wood, Missouri, where Anne served as President of the Army Wives Club. Two years later, they settled in Memphis, Tennessee, where George joined the faculty at the University of Tennessee Medical School and Anne worked as a travel agent for All Travel for many years. Anne was a quiet but generous giver of her time to several organizations and nonprofits throughout the years. She loved her time in the used bookstore at the Memphis Public Library as well as the time she spent at Manna House ensuring that the clients never went without a good pair of socks. Anne and George also delivered countless meals through MIFA, making many new friends along the way. Her favorite volunteer work was with Sacred Heart Catholic Church where she served on the Parish Council for decades. Anne enjoyed walking many miles for exercise with her dear friend and neighbor, Betty Radford. She had a smile that lit up the room and complemented her wonderful sense of humor. Anne was a voracious reader and crossworder, completing the NYT Crossword daily for most of her adult life. She was loved dearly by her five grandchildren, who enjoyed countless sleepovers over the years with their beloved Nannie. She and George loved to travel and visited approximately 120 countries over the years. She is survived by her husband George, children Scot (Michelle), Katie Sentilles (Shawn) and Marshall; grandchildren Sabrina (Nate Davis), Claire, Quinn, Francie and George; and great grandson Knox. She is also survived by her siblings Angela, Vera, and Grace, sister-in-law Virginia and a multitude of nieces and nephews. She was predeceased by her parents Katie and Peter McPherson, siblings Cathie, Francie, Helen, James, Thomas, John and Daniel. Services will be held at 10 a.m., Saturday, June 25, 2022 at St. Patrick’s Catholic Church, 277 S. 4th St. Memphis, Tennessee 38126. The service will be livestreamed at the following link: https://www.facebook.com/StPatrickCatholicChurchMemphis The family requests any memorial contributions be sent to Manna House, 1268 Jefferson Ave, Memphis, Tennessee 38102.

The family of Anne Galloway Cowan created this Life Tributes page to make it easy to share your memories.

Send flowers to the Cowan family.