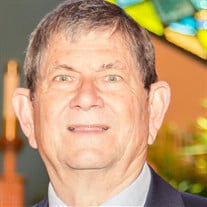 Anthony J. “Tony” Brignole III was born September 29, 1946 at St. Joseph Hospital in Memphis. He was affectionately known by his family as” Sonny”. He passed away June 17, 2020 at Methodist Hospice House. He was preceded in death by his parents Anthony J. Brignole, Jr. and Mary Margaret Warner Brignole as well as his younger brother, Ron. He is survived by his wife of 50 years, Mary Hendrick Brignole, daughter Angela Brignole Schreiner (Kyle) and granddaughter, Dorothy Elizabeth Schreiner as well as by his sisters, Rita Brignole Pellegrin (Hank), Theresa Brignole Seviek (Joe), and brother James. Other survivors include nieces Stacey Pellegrin Peeney (Mike), Sarah Brignole Cannon (Phil), Laura Brignole Raptis (Jon), Amy Brignole, Tracey Brignole Bowman (Josh), nephew/godson Hank Pellegrin, Jr. (Christi), nephew Paul Hendrick, (Catherine) and godson Joe Warner III (Jenny). Tony graduated from Catholic High for Boys in 1964. After high school, he was among the first graduates of the new Chemical Engineering Department at Christian Brothers College (CBC). While a student, he was president of the student chapter of AIChe. He later served as president of the CBC alumni association. Upon graduation, he began a 27-year engineering career with DuPont/ICI Acrylics. Early in his tenure, he obtained his professional engineer’s license. He also obtained a real estate broker’s license and worked part time with his father at Brignole Realty. He and his colleagues at DuPont were some of the early graduates of the Mechanical Engineering graduate program at Memphis State. Post retirement he was sought after as an acrylics expert, consulting around the world with such companies as American Standard, for whom he designed and helped start-up their plant near Cairo, Egypt. Tony was the consummate engineer who enjoyed his profession and was always happy with his career choice. One of Tony’s favorite hobbies was amateur (HAM) radio. He served as president of the Mid-South Amateur Radio Association (MARA). Always willing to help fellow “hams” with radio issues, he amassed quite a collection of radio test equipment. Ever an innovator, he founded “Freefest”, a sort of radio vendor sales and swap meet at which prospective hams could also come to take licensure exams. Proceeds from prize ticket sales at the event were donated to Methodist LeBonheur Children’s hospital. He was Chairman of the event for ten years before stepping away, but the event continues to be a great success. He was presented the Marconi award by the American Radio Relay League and the Clayton Elam award by MARA. A natural leader, Tony was the Country Club Estates Homeowners Association board president for several terms. He was always ready and willing to repair anything that needed it. He had an incredible love for animals and was known by many to rescue or help animals in need. He rescued the family cat Bismark, and several canine family members Jackson, Juliette and Iris over the years. He loved them dearly and missed them after their deaths. Another one of his many passions was cooking. He took classes at the Viking cooking school and served there as a volunteer. He thoroughly enjoyed entertaining friends and hosted the best parties! At home he loved whipping up such treats as white chocolate bread pudding, tiramisu, and cherries jubilee. He was especially talented at barbecuing and judging barbecue contests. When asked where the best ribs in Memphis were, his son-in-law Kyle replied, “at my father-in-law’s house”. In addition to his love for culinary arts, Tony also loved the performing arts, and served on the board of the Tennessee Ballet Company. During his service, he was instrumental in bringing both Mikhail Baryshnikov and Rudolf Nureyev to perform in Memphis. He was a devout Catholic and longtime member of St. James parish. Tony never missed mass until he was in the hospital. Whether traveling abroad on business or vacation, he always sought out the nearest Catholic church and checked out the mass times in advance. He was dismayed at the fire damage to Notre Dame Cathedral where he and Mary had attended mass in the past. His other favorite cathedrals to visit were in New Orleans, New York and Rome—his favorite cities. He was blessed to have attended mass at St. Peter’s Square celebrated by the Pope during the recent holy year. The family wishes to express appreciation to staff at Methodist Hospice House, Functional Independence Home Health Care and Senior Care Management as well as all who cared for him at Methodist University Hospital. Visitation will begin at 12noon on Friday, June 26, 2020 at St. James Catholic Church, 4180 Leroy Avenue 38108. Funeral mass will follow at 1 o’clock with interment afterward at Calvary Cemetery. *Attendees at the visitation and/or funeral mass will be required to wear masks and practice social distancing according to policies in place with the Catholic Diocese of Memphis and St. James Parish. In lieu of flowers the family requests donations in Tony’s memory to Street Dog Foundation, St. James Church, or Christian Brothers University.

The family of Anthony J. Brignole III created this Life Tributes page to make it easy to share your memories.

Send flowers to the Brignole family.