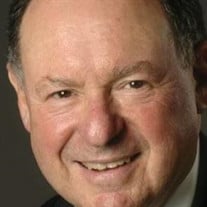 Arnold Edwin Perl, nationally recognized attorney and Memphis civic leader, passed away peacefully on May 4, 2021 at age 81, surrounded by a loving family whom he cherished dearly. Although born in Beaumont, Texas, Arnold adopted Memphis as his home in 1968, and both he and the City were better for that decision. It was in Memphis that he founded Young and Perl P.C., a boutique labor law firm representing global Fortune 200 companies, including Toyota, ITT, and Bridgestone. He would later go on to finish his career at renowned Memphis-based law firm Glankler Brown. As a management-side labor attorney, he was sought after for his expertise, sound judgment and skill with people. During a legal career that spanned almost 60 years, he argued dozens of cases before the National Labor Relations Board, numerous times before various federal appellate courts and once before the United States Supreme Court. He played an important role in a number of precedent setting decisions, and was listed in every edition of Best Lawyers in America for 55 years. But Perl never limited his activities to the legal profession. For more than 30 years, he was a member of the Memphis-Shelby County Airport Authority, serving as its Chair for 16 years from 1996 to 2012. During those years, he played a critical role in Memphis International Airport’s achievement as the number one cargo hub in the world, and major passenger hub for Northwest Airlines. He also worked to solidify the FedEx hub in Memphis through the land swap deal with the Air National Guard. Among his achievements as Chairman was Memphis’ only nonstop flight to Europe, and construction of the World Runway that expanded the airport’s capacity to accommodate fully loaded wide-bodied aircraft. His successful record as a unifier and effective project manager made him a natural choice as Chairman of the Public Building Authority responsible for building the FedEx Forum. Leading what was widely regarded as one of the most successful public projects in the history of our city, Perl was critical to delivering the arena to his beloved Memphis Grizzlies on time and on budget. Perl was always interested in government and politics and in Memphis became an active behind-the-scenes leader in GOP politics. During the early 1990s, he served as Finance Chair for Shelby County and Inauguration chair for his longtime friend Governor Don Sundquist. He went on to serve the State as a Trustee of University of Tennessee education system. Beyond his civic accomplishments, Perl was a committed member and leader of the Memphis Jewish Community. A member of the Temple Israel congregation for six decades, he served as its 45th President from 2006 to 2009. Perl was routinely featured and quoted in newspapers and journals and regularly relied upon by Memphis and Tennessee state-wide elected leaders. Although committed to his local community, Perl never lost sight of the larger world and had a deep appreciation for and interest in Japan, traveling there many times over his life. He translated that interest and expertise into action on behalf of the people of the region when he served as Chairman of the Southeast-U.S. Japan Society of Tennessee. He was awarded the Order of the Rising Sun, Gold Rays with Rosette, the second highest civilian decoration conferred by the Emperor of Japan. He tapped into wisdom acquired over a lifetime when he authored Simple Solutions along with FedEx Executive Tom Schmitt. In typical Perl fashion the book offered practical leadership advice, and included a forward by Fred Smith, Chairman, CEO and Founder of FedEx. Arnold Perl was born in 1939 in Beaumont, Texas to Joseph G. Perl and Cecil L. Berman. He attended the University of Illinois, earning both his B.A. and law degree from the school. Immediately following law school, he worked for the National Labor Relations Board in Memphis and Washington. When his term there was completed, he joined McDermott, Will and Emery in Chicago. In 1968, Memphis drew him back and he began his life-long commitment to his adopted city. In Memphis, he found his life’s love and partner, Mary Lynn Perlman, a local Memphian. She was always by his side in all his endeavors, and critical to his many successes. Together they raised two daughters, Stephanie (Marks) and Laurie (Meskin). He cherished his wife, daughters, Laurie’s husband Jeff Meskin, Stephanie’s husband Jonathan Marks and his six grandchildren Jake, Hannah and Daniel Meskin and Rachel, Josh and Julia Marks, all of whom loved him dearly. He was a devoted grandfather who had a special bond with each of his grandchildren in a way they will never forget. Indeed, while his life was filled with remarkable accomplishments, he often said that his family was his greatest legacy. The family requests that memorials be made to Temple Israel at timemphis.org or Memphis Jewish Federation at jcpmemphis.org or MD Anderson Cancer Center at mdanderson.org.

Arnold Edwin Perl, nationally recognized attorney and Memphis civic leader, passed away peacefully on May 4, 2021 at age 81, surrounded by a loving family whom he cherished dearly. Although born in Beaumont, Texas, Arnold... View Obituary & Service Information

The family of Arnold Edwin Perl created this Life Tributes page to make it easy to share your memories.

Send flowers to the Perl family.