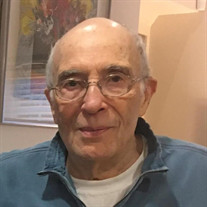 Aron Livnah, a good husband, a caring father, a brave soldier, and a lousy golfer, died Tuesday, March 15, at Baptist Reynolds Hospice House in Collierville. He was 82. Aron was born in Haifa, Israel, in 1939, nearly a decade before Israel was recognized as an independent nation. He spent his youthful summers working on a farming kibbutz in northern Israel near the Lebanese border where, as a young man, he learned the importance of endurance and the value of hard work. The only child of a Holocaust survivor who fled from Germany to Israel, Aron graduated from The Technion, the Israel Institute of Technology, with a degree in engineering. His career was interrupted by the 1967 Arab Israeli War in which he served Israel as a tank commander in the West Bank and on the Golan Heights. Two weeks after the Six-Day War ended, Aron was on his way to New York to complete his graduate studies at the State University of New York in Buffalo. As Aron earned his graduate degree in engineering, he fell in love with America despite the freezing cold and snow, both of which he never learned to love. He often said that one of his proudest moments was when he became a U.S. citizen, although he always cherished his personal ties to Israel. Aron worked for DuPont and its subsidiaries in New York before transferring in 1992 to Memphis where he found warm weather and his wife, Rose Merry Lapides Brown. While exercising in his favorite gym at the Memphis Jewish Community Center, Aron, the mechanical and industrial engineer, asked Rose Merry how an elliptical machine works. That question launched the beginning of their lives together, and they married 22 years ago. After 35 years with DuPont, Aron retired in 2015 and decided that the best symbol of retirement would be a set of golf clubs – a pastime discouraged by his late brother-in-law, George Lapides, who nonetheless gave Aron a set of clubs then wished him luck. Regardless how often he hit the links, Aron never quite mastered the art of golf even though he spent a small fortune in lost golf balls. Aron believed in daily exercise, but only in the afternoons since he also believed that the privilege of retirement was to sleep until 11 a.m. Twice each week Aron met with friends for a ROMEO lunch, an acronym for Retired Old Men Eating Out. They routinely discussed the problems of the world but, to Aron’s chagrin, they failed to solve any of them. For Aron, music was created to soothe the soul and he was a longtime supporter of the Memphis Symphony Orchestra and the Germantown Performing Arts Center. Aron was preceded in death by his parents, Rivka and Zev Langer; and his beloved daughter, Segall Livnah, for whom he established the Segall Livnah Fund at the Jewish Foundation of Memphis to support children’s services at Hadassah Hospital in Jerusalem plus financial aid to female medical students studying pediatrics. In addition to his cherished wife, Rose Merry, Aron also leaves a stepdaughter, Emily Brown of Memphis; a stepson, Jay Brown (Jennifer Gurevitz) of Dallas; a grandson, Abe Jacob Brown; a son, Gil Livnah of Menlo Park, Calif.; his closest childhood friend, Dani Eshet of Haifa; and a small but admiring circle of friends who will miss him dearly. His funeral is at 11:30 a.m., Thursday, March 17, at the Levy-Cooper Chapel in Temple Israel Cemetery, 1708 Hernando Road, followed by a reception in honor of Aron’s life from 3 p.m. – 5 p.m. at Temple Israel, 1376 E. Massey Road. Please No Flowers In lieu of flowers, the family asks that you remember Aron with a donation to the Memphis Jewish Community Center, Temple Israel in Memphis, or the Memphis Symphony Orchestra.

Aron Livnah, a good husband, a caring father, a brave soldier, and a lousy golfer, died Tuesday, March 15, at Baptist Reynolds Hospice House in Collierville. He was 82. Aron was born in Haifa, Israel, in 1939, nearly a decade before Israel... View Obituary & Service Information

The family of Aron Livnah created this Life Tributes page to make it easy to share your memories.

Send flowers to the Livnah family.