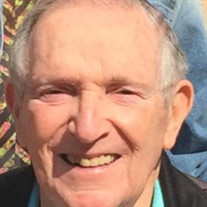 Arthur Marshall King Surrounded by his four children, Arthur Marshall King passed away on March 8, 2020 at Baptist Reynolds Hospice House after a long battle with cancer. Born July 11, 1931 in Chicago, Illinois to Migel and Cecile King, Arthur was predeceased by his wife, Rosalind Rosenblum King, of 60 years, his brothers Richard (Dick) King and Erwin King and his Grandson David Marsh King. He is survived by his sister Sandy King Martin, his children, Ronnie King (Pam), Jay King, Fran King Twersky (Steve), and Terri King and his grandchildren: Brian Twersky (Nancy) Jessie Twersky, Celia King, Jacob Twersky, Alec King, Rebecca King, Matthew King, Richard Praszkier, Drew Praszkier, Shelby King and David King. Arthur attended Isadore Newman High School and Tulane University in New Orleans, and served in the US Army during the Korean War. Arthur met Rosalind in New Orleans and moved to Memphis with their 4 kids in 1974 to be closer to her family. Arthur had an entrepreneurial spirit throughout his career. He spent over 40 years growing his family’s optical business. Was a devoted husband, committed father, loyal son, caring brother, best friend, gifted golfer, proud patriot and a kind soul, who never met a stranger, went out of his way to help others and had a passion and zest for life and all those he loved. Arthur lived by three principles - Be Positive, Stay in the Present and Don’t Judge. Each day upon awakening Arthur prayed for his country and its leaders, his family and his friends. Arthur will be missed but never forgotten as those who love him will keep his spirit alive in their hearts and memories. Funeral service will be 2 p.m. Wednesday, March 11th at Beth Sholom Memorial Gardens, 2265 Pate, Memphis, TN 38133. Donations in Arthur’s memory can be made to Memphis Humane Society or to a charity of your choice.

The family of Arthur Marshall King created this Life Tributes page to make it easy to share your memories.

Surrounded by his four children, Arthur...

Send flowers to the King family.