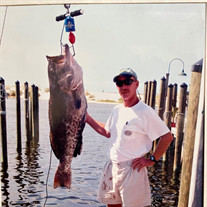 AUGUSTINES MARIA BERMEL, born June 12, 1940, went on his way December 24, 2021. An entrepreneur since emigrating from the Netherlands in the 60s, Peter, as he was called upon arrival, did whatever he wanted. Fortunately, he did things that made most people he met rather happy - most of the time. He has done everything from driving formula ford race cars at Silverstone in England during the 70s, forming the Memphis State Soccer team in the 80s, captaining a 45 foot long 1969 Hatteras Charter Fishing vessel in Destin, Florida during the 90s, and cruising the Caribbean in a sailboat with his wife in the 00s. One of 13 children, before his US debut he was known as the “best dressed man in Dorrnenburg”, and worked with beautiful woman who were his models during hair cutting competitions in his hometown. It was this family business of hairdressing that afforded him the opportunity to respond to a Texas advertisement requesting European hair dressers to come to America. When he disembarked the jet he thought the heat from the engines was blowing on his neck, it wasn’t until he walked down the concourse that he realized the ambient breeze was his new normal, before stepping into the first air conditioned building of his life. He soon moved to Memphis as his brothers and sisters started to join him in creating the locally renowned Bermels hair shop near Poplar Avenue and Humes Street - together their work gave countless people the confidence to face the world. Around the time he was raising his first son Erich with his first wife Dot, his future wife Clare was raising her first son Jeff. At the right time the two met and shared a bond that would last them until his death. But not before begatting the author of this meandering obituary, Andrew. Together Pete and Clare raised their three children until the oldest graduated high school, then moved Niceville, Florida with said author in tow. They first lived on a 40 foot long Bristol sailboat they renamed Gullwing, after a rusting Mercedes 300sl Gullwing Pete salvaged from a scrap yard, and later sold to a passerby-er who noticed it in their car port. This sale was the catalyst to complete a promise the couple made to each other to one day live on the water in Florida, and sail. Lighting strikes, storms, hurricanes, and tornadoes later. They sold the boat and moved to the land Pete bought in Mississippi years ago and built a tiny barndominum where he spent the rest of his days in peace working on an old tractor, motorcycles, and sports cars with select friends and family. A mentor to many, a husband to a few, a father to three, he did what he wanted - until the very last moments before he went on his way. He was survived by all his sons: Jeff Norton, Erich Bermel, and Andrew Bermel. His wife Clare Ozenovich Bermel. His brothers Jozef, Frank, Peter, Hans, Heinz and Gerard; and his sisters, Rina, Marga, Maria, and Annamarie - and their many children and grandchildren. And even though my father lived the way that suited him, I think it was clear that his most precious achievement was blazing a path for his siblings to enjoy the opportunity of freedom in a new world. The family will be gathering from 2-4pm on Tuesday, January 4th at Canale Funeral Directors. The address is: 2700 UNION AVENUE EXTENDED MEMPHIS, TN 38112 901.452.6400 During the most recent years of Pete’s life he asked Clare to donate to the International Fellowship of Christians and Jews, so if you feel compelled to give, In lieu of sending flowers, we request donations be sent by check or money order to: International Fellowship of Christians and Jews P.O. Box 96105 Washington, DC 20090-6105

AUGUSTINES MARIA BERMEL, born June 12, 1940, went on his way December 24, 2021. An entrepreneur since emigrating from the Netherlands in the 60s, Peter, as he was called upon arrival, did whatever he wanted. Fortunately, he did things that... View Obituary & Service Information

The family of Augustines Maria Bermel created this Life Tributes page to make it easy to share your memories.

Send flowers to the Bermel family.