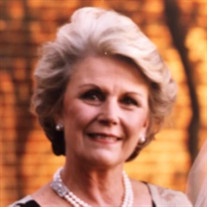 Not sure what to send?

Barbara Ann Smith Heiskell Mills, age 79, peacefully passed away December 20, 2021, at her home in Memphis, TN after a long illness. Born February 12, 1942 in New Orleans, La, she was the daughter of Dr. Robert N. Smith Jr. and Betty Buxton Smith Stevenson. Barbara grew up in Harlingen, TX. She graduated from The Hockaday School, Dallas, TX, in 1960 and Mount Vernon College, Washington, DC in 1962. Affectionately known as “Babo”, Barbara made lifelong friends growing up in South Texas and while living in Mississippi, Tennessee and Texas. She possessed a true sense of elegance, style, grace and beauty. She had a natural talent of entertaining and always looked for a reason to bring friends and family together. These gatherings were sure to include her famous “Babo bread” and “Babo pecans”. She married the love of her life, Lamar Heiskell, in June 1962 and they had two children before losing him in the Vietnam War. She later married Mike Mills and they had one child. Barbara treasured her family and remained a loyal friend to these extended families. In the late 1960’s and early 1970’s, she worked for the shops of John Simmons in Memphis, TN. She moved to Dallas, TX in the 1980’s. There she worked for Neiman Marcus and the Marie Leavell gift shop before opening Porta, a gift showroom in the Dallas Market Center for the Portugal Trade Commission. Dallas is where is met her companion of 30 years, Ralph Bullington. Together they brought joy to their families and shared a love of travel and entertaining. Following his death in 2013, Barbara moved back to Memphis, TN. She is preceded in death by her parents and her brother, Robert N. Smith III. She is survived by her children, Margaret Heiskell Jefferson (Randy) of Memphis, TN, Lucius “Luke” Lamar Heiskell (Elizabeth) of Oxford, MS, and Elizabeth Mills More of Houston, TX; grandchildren James Jefferson (Sumner), Katherine Jefferson, Stott Heiskell, Mary Paxton Heiskell, Lucia Heiskell, Chase More and Mills More. She also leaves behind her sister, Carolyn Smith Lorimer (Bill) of Fort Worth, TX, niece Allison Lorimer Henderson (Josh) and nephews Bill Lorimer (Claire) and John Lorimer, and many extended family and friends. We are grateful for the loving care of her devoted caregiver, Sharon Johnson as well as Tracey Valentine with Excellent Caregiving Services, the wonderful caregivers from Home Instead caregiving agency, and Amedysis Hospice, especially Barbara Vaughn and Reagan Graham. A private family burial was held immediately following her passing. A memorial service will be held at eleven o’clock in the morning on Saturday, the 12th of February, at St. John’s Episcopal Church, 3245 Central Ave, Memphis, TN, followed by a reception in the Parish Hall. If you would like to honor Barbara, please consider donating to St. John’s Episcopal Church, 3245 Central Ave, Memphis, TN 38111 or Texas Children’s Hospital, Office of Philanthropy, Ste. 5214, PO Box 300630, Houston, TX 77230-0630 to benefit the Fetal Center at Texas Children’s Hospital. Or Online: texaschildrens.org/supportfetalcenter

The family of Barbara Ann Smith Heiskell Mills created this Life Tributes page to make it easy to share your memories.