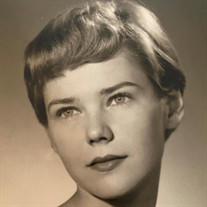 Bettie W. Golwen, age 85, devoted wife, loving mother and grandmother, departed this life January 29, 2022. Bettie was born September 29, 1936, in Memphis. She was preceded by her parents, Betty Stone and John R. Watson, and sister, Patsy Watson. Bettie graduated from Messick High School, attended Southwestern, where she was a member of Kappa Delta sorority, and graduated from Colorado College in Colorado Springs, where she was introduced to her future husband, Howard, at the officers’ club at Ft. Carson. They married in 1959 in a military ceremony and resided in New York City for one year. They returned to Memphis, where they shared a beautiful marriage for 63 years and enjoyed a wonderful life with family and friends, who fondly remember “Sweet Bettie” and “Ole Howard” dancing the evening away at the University Club and singing in the piano bar at Chickasaw Country Club. For many years Bettie was an active member of St. Mary’s Episcopal Cathedral, where she served as president of the Episcopal Church Women, St. Augustine Guild, and Episcopal Book Store. She served on the board of directors of Father Don Mowery’s Youth Service and was a member of the Woman’s Exchange and Josephine Circle. Bettie was an avid bridge player and passionate fan of the Memphis Grizzlies. Bettie is survived by her husband, Howard Lee Golwen, daughter Anne Brand (David), son John S. Golwen (Tammy), and grandsons John Huntley Brand, Henry Gardner Brand, and Greer Golwen. A memorial service will be held March 14 at 3 p.m. at St. John’s Episcopal Church, Memphis, with a reception to follow in the Parish Hall. In lieu of flowers, the family requests memorials be directed to St. John’s Episcopal Church.

The family of Bettie Watson Golwen created this Life Tributes page to make it easy to share your memories.

Send flowers to the Golwen family.