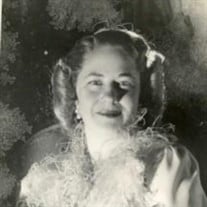 Betty Jeanne Jacobs Hoyt Betty Jeanne Hoyt was born August 17, 1920 in Evanston, Illinois and died March 3, 2020 , five months short of her one hundredth birthday at Allen Morgan Nursing Home. She graduated from The Hutchison School, and attended Fairmont College in Washington, D.C. and Southwestern College, now Rhodes, in Memphis. Under her maiden name, Betty Jeanne Claffey, she was a columnist and reporter for The Commercial Appeal. During World War II, she was also aviation editor, and was Penny Jr. the social editor. Betty Jeanne was the wife of Frederick Phillip Jacobs Jr. of Grider Plantation, Grider, Arkansas where they lived for many years before she moved back to Memphis as a widow.. She later married Henry K. Hoyt of Leachville, Arkansas and Memphis.. An authority and lecturer on antique glass, she had been a docent at Memphis Brooks Museum and The Dixon Gallery. She was past president of Woman's Exchange and a member of The Memphis Glass Collectors Club, Les Passees and The Church of The Holy Communion. She leaves two children, Jeanne Jacobs (Lichterman) Sutherland of Memphis and Valerie Hoyt Alberta of New York City. Betty Jeanne’s son, Frederick Phillip Jacobs III, predeceased his mother by three years. Betty Jeanne also leaves one grandson, Martin Joseph Lichterman III and two great granddaughters, Madalyn Elise Lichterman, and Katherine Elizabeth Lichterman. There will be a small service for family at the Church of The Holy Communion with internment in the memorial garden at a later date..

The family of Betty Jeanne Hoyt created this Life Tributes page to make it easy to share your memories.

Send flowers to the Hoyt family.