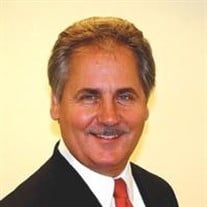 We are saddened to announce that Bryce D. Haugsdahl passed away on December 15, 2020 in Memphis, Tennessee at the age of 70. He was born in Yakima, Washington to Vernon and Eva Haugsdahl and was the oldest of four children. He attended Central Catholic High before transferring to Eisenhower High School and graduating in 1968. Bryce earned his A.A. in Technical Aeronautics from Yakima Valley Community College in 1970 and his B.A. in Business Administration from Central Washington University in 1972. Bryce was a man who loved life. As a young man, he enjoyed performing as the drummer in a local band, earned his first pilot's license while going to school, and ventured with a college friend to the summit of Mt. Adams. Bryce said of the adventure, "Reaching the true summit of 12,327' was more than a victory! It was more than an achievement. It was validation that we had gone beyond what we thought were our limits. We learned that when things seem darkest, we are often at the threshold of a breakthrough. We would never be the same. We had new tools to face the next of life's challenges." Professionally, Bryce felt drawn to non-profit work and started working for United Way in Yakima prior to graduating from college. He went on to serve communities and non-profits across the country through his professional contributions and executive and board level leadership at United Way. His fundraising efforts alone resulted in more than $750 million in United Way support for social and health service programs. He also served as a consultant to United Ways across the country, served as Chairman of the Board for United Ways of Tennessee, and prior to retiring in 2014, he served the last four years of his 42 year career as President of United Way of the Mid-South. Bryce discovered his passion for flying at an early age. He flew many types of aircraft, including Learjets, which was his true love. While a United Way Executive, he was also a Learjet pilot, often flying nights and weekends. As a Chief pilot for Palm Air Executive Air Charter he provided on demand air charter service. Services included air ambulance, and as a pilot, Bryce would deliver transplant organs to hospitals, helping to save people's lives. It was just like Bryce to do this. He also provided elite passenger and executive transport, which allowed him to meet many well-known people. Bryce also taught ground school so that he could share his passion for flying and help others to master this incredible skill. Bryce had an incredible memory, a very sharp intellect, and a love of learning. He was also an exceptionally skilled communicator and an excellent storyteller. He employed these gifts to the great benefit of others throughout his career as a social service executive at United Way, as a pilot, as a flight instructor, and in his many volunteer roles. Bryce was a man who loved life. He had a heart for adventure, a capacity for wonder and a love of learning. And, as evidenced through his many adventures and accomplishments, he embraced life with amazing dedication, passion, and enthusiasm. His many hobbies included riding motorcycles, boating, scuba diving, golfing and traveling. Bryce was a devout Catholic, and a devoted son, brother, uncle and friend. There was nothing in the world that meant more to him than his faith, his family and his friends. This was his true joy. Bryce was preceded in death by his father, Vernon, and his mother, Eva, and a younger brother, Larry, who died at the age of 8 after open heart surgery. He is survived by two sisters, Theresa (Dennis) Champoux and Denise (Roger) Moore, both of Yakima. He also leaves behind nieces and nephews, Valerie (Paul) North, Angela (Russell) Sypowicz, David Champoux, Adam Moore, Julie (JD) Ross, Kristi (Nate) Stalsbroten and Curtis Moore, and many special lifelong friends, especially Sheila and Elaine Rice of Parkland, Florida. Funeral mass to be held at St. Louis Catholic Church in Memphis, Tennessee at a later date. Services pending. Please visit www.canalefuneraldirectors.com for more information, and search Bryce D. Haugsdahl.

We are saddened to announce that Bryce D. Haugsdahl passed away on December 15, 2020 in Memphis, Tennessee at the age of 70. He was born in Yakima, Washington to Vernon and Eva Haugsdahl and was the oldest of four children. He attended Central... View Obituary & Service Information

The family of Bryce Dennis Haugsdahl created this Life Tributes page to make it easy to share your memories.

We are saddened to announce that Bryce D. Haugsdahl passed away...

Send flowers to the Haugsdahl family.