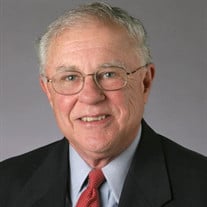 C. Thomas Cates passed away peacefully on December 23, 2020, of cancer. Tom Cates was born on July 24, 1941 in Memphis, Tennessee, to parents Charles and Mary Evelyn Cates. His father owned a country grocery store, and for a time, Tom and his sister Marilyn lived with their family in the back of Cates Grocery in Milan, Tennessee. He excelled at Milan High School as the co-captain of the football team, the Senior Class President, and was named “Mr. Milan High” for the class of 1959. He graduated from Memphis State University in 1963 and Vanderbilt Law School in 1965, where he was on the Law Review and the Order of the Coif. He served in the Army Reserves and was honorably discharged. While in law school, he met Elaine Taylor. After a whirlwind romance, he married her in 1965. Together, they created a wonderful life for their four children, Cindy, Charlie, Taylor, and Andy. Tom was so proud of his children and modeled for them the values of hard work, humility, and service. He has been blessed with seven grandchildren who loved to call him “Papa.” For more than forty years, he practiced law with Burch Porter & Johnson, in Memphis. Resisting the trend to focus on one specialty, he was a “lawyer’s lawyer,” able to help his clients with complicated transactions as well as litigation matters and any other problem that arose. He was an exacting and effective mentor, passing along to young lawyers who worked with him the benefit of his wisdom and experience. Beginning in the early 1990s and continuing through his retirement in 2013, he served as the City Attorney for Germantown and Collierville, Tennessee, providing steady leadership through a period of tremendous growth for both communities. Among his many accomplishments in this role was the negotiation to secure the land use rights necessary for the development of Wolf River Boulevard. He also spearheaded the litigation on behalf of several municipalities which led to the creation of the municipal school districts in Shelby County. Tom was instrumental in assisting the City of Germantown in establishing its own library. He was an active reader and appreciated the value of a strong library to a community. For many years, he served as the Chairman of the Board of the Germantown Library Foundation. In gratitude for his years of service, the Germantown Library recently named its primary collection the “C. Thomas Cates Collection.” Since moving to Germantown in 1979, Tom and Elaine have been active and devoted members of Germantown Presbyterian Church. Tom taught Sunday school for youth and adults and furthered the church’s mission projects. His work with the church led him to serve as a board member, and ultimately Chairman of the Board, of NaCoMe, a Presbyterian camp and retreat center in Pleasantville, Tennessee. As much as Tom was known for his legal and professional skills, he was also renowned for his skill as a gardener and outdoorsman. He was eager to share the bounty of vegetables he grew and to advise others of the secrets of his gardening success. Many friends, church members, neighbors, work colleagues, and even strangers enjoyed vegetables that he grew, especially his tomatoes. Every year, workers at MIFA would look forward to when he would deliver to the office a truck full of watermelon and sweet corn. He also enjoyed to fish and to hunt ducks and quail. He loved to host “fishing rodeos” at his home. He helped many children over the years catch their first fish. He is survived by his wife Elaine; his sister Marilyn McCormick (David Spell); his children Cindy Cates Moore, Charles Cates, Jr., Taylor Cates (Carolyn), Andy Cates (Mary Allison); and his grandchildren Isabelle Moore, Lucy Moore, Amelia Cates, Thomas Cates, Campbell Cates, McCool Cates, and Wren Cates. Due to the ongoing pandemic, the family will wait and hold a memorial service on February 16, 2021, at Germantown Presbyterian Church, which will be live-streamed. Memorials may be made to the Germantown Community Library, 1925 Exeter Road, Germantown, TN 38138; Germantown Presbyterian Church, 2363 S. Germantown Rd., Germantown, TN 38138; or NaCoMe Camp and Retreat Center, 3232 Sulphur Creek Rd., Pleasantville, TN 37033.

C. Thomas Cates passed away peacefully on December 23, 2020, of cancer. Tom Cates was born on July 24, 1941 in Memphis, Tennessee, to parents Charles and Mary Evelyn Cates. His father owned a country grocery store, and for a time, Tom... View Obituary & Service Information

The family of C. Thomas Cates created this Life Tributes page to make it easy to share your memories.

Send flowers to the Cates family.