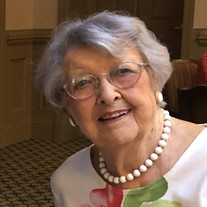 Camille Falls Bennett (Puddy), 94, passed away peacefully in her sleep on January 27, 2020. Puddy was preceded in death by her husband, the love of her life, Edwin Lyles Bennett, Sr., her sister Betty Falls Rentrop and her parents John (Jack) and Camille Falls. She leaves her sister, Anita Falls Pharr, who she shared the last few years of her life while both residents of Trezevant Manor. A lifelong Memphian, Puddy attended Hutchinson School and graduated from Central High School in 1942. She attended the University of Texas at Austin where she was a member of Pi Beta Phi Sorority. And, she worked as a flight attendant for Chicago & Southern Airlines, now Delta. Puddy and Ed raised five wonderful children. Anita Bennett Pohlman (Ray). Edwin Lyles Bennett, Jr. (Vicki), John Falls Bennett (Linda), Elaine Bennett Davidson (Jim), and Michael William Bennett (Cathy). Puddy was “Nana” to ten grandchildren and ten great-grandchildren whom she loved dearly. Carrie Pohlman Vaughan (David), Courtney Pohlman Ross (Jason), Braxton Flautt, Edwin Lyles Bennett, III (Andrea), John Falls Bennett, Jr. (Elise), Julie Bennett Kueckelhan (Austin), Jenna Davidson, Caroline Davidson, Austin Moran Bennett, and Camille Louise Bennett. Her great-grandchildren are Bennett and Lawson Vaughan, Jake and Ellie Ross, Lyles and John Rex Dockery, Beau Bennett, Tripp and Jillian Bennett, and Landon Kueckelhan. Despite managing such a large family, Puddy found time to help others. She was a member of the Junior League, St. Louis Church Altar Guild and delivered meals for MIFA. She was a member of two garden clubs, Our Home and the Melody Lane Garden Club, but no one seems to remember her actually working in the yard. A devout Catholic, Puddy attended daily Mass with her husband, Ed, for many, many years. When she could no longer make it to Church, she attended Mass via television. In 1966, she made a Cursillo, only the second one held in the Diocese of Memphis. Puddy and Ed’s faith in God and love of family will last through the generations. The family would like to express our love and gratitude to two wonderful women who provided around the clock care to Puddy. Rhonda Crawford and Dot Pearson please know that you made her last days much more comfortable and enjoyable. You were great companions. And, special thanks to Dr. Robert Kraus and Methodist Hospice. All services will be at St. Louis Catholic Church, 203 S. White Station Road where the Bennett family were charter members. Visitation will be Thursday, January 30, 2020 at Noon. Mass of Christian Burial will be celebrated at 1:30 pm. Burial will be in Memorial Park Cemetery. If you would like to honor Puddy Bennett’s life, please consider a gift to the Michael J. Fox Foundation for Parkinson’s Research or the charity of your choice. Rest in Peace “Sweet Puddy.”

Camille Falls Bennett (Puddy), 94, passed away peacefully in her sleep on January 27, 2020. Puddy was preceded in death by her husband, the love of her life, Edwin Lyles Bennett, Sr., her sister Betty Falls Rentrop and her parents John (Jack)... View Obituary & Service Information

The family of Camille "Puddy" Falls Bennett created this Life Tributes page to make it easy to share your memories.

Send flowers to the Bennett family.