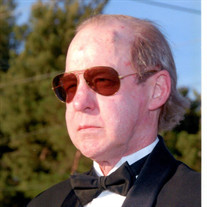 Carl Gregory ‘Greg’ Robinson Rossville, Tennessee June 23, 1954- July 10, 2021 Greg Robinson of Rossville, Tennessee, 67 years old, passed away on Saturday, July 10, 2021, at Germantown Methodist Hospital in Germantown, Tennessee. Greg was born June 23, 1954, in Memphis, Tennessee to G. A. Robinson, Jr and Nell Bankston Robinson who both preceded him in death. He is survived by his wife Kathy Poortvliet Robinson of Rossville, Tennessee and one brother G. A. Robinson III of Memphis, Tennessee. He leaves his son Connor Robinson (Elizabeth); bonus children, Amanda Gossett (Travis) and Alan Dude (Johanna). Also remaining to carry on are eight grandchildren; Phoebe (Connor & Liz), Savannah, Gage, John, Ares and Phoenix (Amanda & Travis) as well as Kamryn and Elijah (Alan & Johanna). He will be remembered by his nieces, nephews, cousins and other family and friends who knew him as a ‘rascal’ and a true and faithful friend. Greg will be especially missed by his canine family, Elvis and Lulu. Greg attended PDS, East High School and Memphis State University. He farmed in Robinsonville, Mississippi for a number of years and retired from G A Robinson Land Company where he worked with his dad and brother. He won numerous barbeque cooking contests, including one in Ireland, loved photography, and volunteered for fund raising events for NFT and St Jude. His favorite thing to say was “Oh, Yeah ! Watch this…” He was loved by many and will be missed. There is an empty place in this world where Greg Robinson dwelt, but his memory lives on in our hearts. Memorial Services will be 9 a.m. Thursday, July 15, 2021 at Canale Funeral Directors. There will be a private family burial in Raymond, Mississippi on Thursday afternoon. The family asks that donations be made to either St Jude Children’s Research Hospital or American Cancer Society. A special thanks to the wonderful staff at West Clinic and Methodist Hospital Germantown.

The family of Carl "Greg" Gregory Robinson created this Life Tributes page to make it easy to share your memories.

Send flowers to the Robinson family.