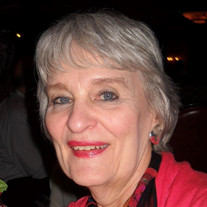 Carol Ann Beachey passed away peacefully at her home on October 19, 2019 after a struggle with pancreatic cancer. She was born December 26, 1935 in Pigeon, Michigan to Harry and Lydia (Shetler) Teuscher. She received her BA from Goshen College in 1957 with a double major in English and Music. She married Edwin H. Beachey in August 1957, and they were married until his untimely death in October 1989. She married her second husband, Donald Voth, in April 1999, in Carmel, California, and he survives her. Carol was a lover of music, art, writing, traveling the world, flowers, her garden, her family, cat videos and so much more. She was born into a family who loved to sing and was named Carol because she was born so close to Christmas. She was a talented singer from a young age and continued to sing throughout her life in many choirs, some of which took her to Europe and Russia, where the high notes she hit with her soaring soprano voice marked some of the highest points of her life. She was also an intrepid adventurer and was able to travel the world with her first husband, Ed, who was a physician-scientist and international expert in Infectious Diseases, and she continued to take solo trips to Paris for several years after his death. It was in Paris where her second husband, Don, knowing her affection for that city, proposed to her in a small cafe overlooking the Seine. She was unusual for her time in so many ways, including that she worked, when most doctors’ wives in the 1960s did not. She was the first Public Relations Director at St Joseph’s Hospital, a department created in 1968 after Dr. Martin Luther King was assassinated, when the hospital realized it needed such a thing. She built it into a vital part of the organization with such energy and aplomb that three people had to replace her when she left in the late 1970s to pursue her writing career, a dream borne from a lifelong love for writing. She published many short stories in national magazines, but, like all writers, had many more in her files that she never submitted and more in her head she never committed to paper. After Ed died, Carol was instrumental in establishing the Edwin H. Beachey Distinguished Visiting Professorship, which continued for 25 years and was recently transformed into the E. H. Beachey Endowment Fund for young researchers in Infectious Diseases. In her later life, she was introduced to Don Voth by Ed’s brother, Jake, and his wife, Bonnie, and what was a telephone courtship for more than a year turned into something of a fairy tale romance, where they were recognized as a dashing and elegant couple wherever they went, and they went many places. Carol and Don’s romance turned into a lasting marriage for the past 20 years. She will be deeply missed by her family and her many friends all over the world. In addition to her husband, she is survived by her daughters Anne Beachey-Kemp (Dave Kemp) and Jennifer Beachey (Jay Leibold), grandchildren Jonas Kemp and Leah Kemp, sister Ruth Rice (Bob), brother Wayne Teuscher, sister Patricia Gascho (Wayne), and brothers-in-law Milfred Mast and Leroy “Lefty” Miller. She was predeceased by sisters Marjorie Miller and Wilma Mast, as well as an infant sister, Mary Joann and sister-in-law Judy Teuscher. Visitation will be at Canale Funeral Home on Thursday, October 24, 2019 from 5-7 pm. Burial will be at Memorial Park on Friday, October 25, 2019 at 11:30 am followed by a funeral service at Idlewild Presbyterian Church at 1:00 pm. The family would appreciate memorials to The Memphis Women’s Foundation, The Mary Oyer Endowment Fund at Goshen College, the E. H. Beachey Endowment Fund at the University of Tennessee, or to a charity of one’s choice.

Carol Ann Beachey passed away peacefully at her home on October 19, 2019 after a struggle with pancreatic cancer. She was born December 26, 1935 in Pigeon, Michigan to Harry and Lydia (Shetler) Teuscher. She received her BA from Goshen College... View Obituary & Service Information

The family of Carol Ann Beachey created this Life Tributes page to make it easy to share your memories.

Carol Ann Beachey passed away peacefully at her home on October...

Send flowers to the Beachey family.