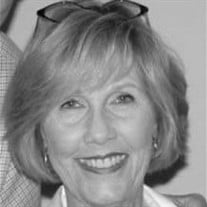 On January 17, Carole Morris Bizot beloved wife, mother, and grandmother passed away at age 83. Carole was born on Sept 14, 1936 in Memphis,Tennessee to John Holmes Morris and Mary Kirk Morris. Carole married Emile Alexandre Bizot in 1957. She was the proud mother of two sons, Chris and Bill. Carole loved to tell the story of how she and Emile met at a poker game she was participating in with friends. When a dispute arose over who had the winning hand, a known poker expert was called to come over and sort it out. That card sharp was Emile Bizot. Although Emile did not rule in Carole's favor, she did not hold it against him and they began dating. Over time, romance blossomed and they married four years later. Other than a short stint in New York City to support Emile's career as a stock broker, Carole was a life long resident of Memphis and loved her city. Carole graduated from Central High School and attended Ole Miss prior to her marriage to Emile. She enjoyed the many cultural activities of Memphis, regularly attending Theater of Memphis productions, the Memphis Symphony, and the Memphis Open tennis tournament, to name a few. Carole never lost her love of playing cards! She was a skillful bridge partner and also enjoyed weekly mahjong games with friends. Carole was a member of the Town and Country Garden club and was a gracious hostess to her many friends and family. She was also a busy and active member of her community and church. Carole was an Elder and Sunday school teacher at Shady Grove Presbyterian church where she will be remembered for her generous and giving nature. She loved to travel, and together Carole and Emile visited many of the most beautiful cities in the world. She passed this love of discovering new places on to her children and grandchildren. Always though, home was where her heart lived, and Carole was happiest when surrounded by her friends and family. But of the many things Carole enjoyed in her life, one of her greatest pleasures was a simple one. She adored her four grand children, Ellie, Sam, Chase, and Aidan. To them, Carole was "Grandmommy", a doting grand mother who was well known to drop everything at a moment's notice to play. Just last year, when her now twenty year old grand daughter suggested the two of them should get matching tattoos as a way of honoring their bond, Carole did not bat an eye. At age 82, Carole Bizot began sporting a rose tattoo on her ankle! Carole is survived by her devoted husband of 62 years, Emile Bizot, and the loving families of her two sons, Chris Bizot and his wife Angie, their two children Ellie and Sam, and Bill Bizot, his wife April, and their sons, Chase and Aidan. Carole is preceded in death by her sister and dearest friend, Anne Morris Heffernan, and her beloved big brother John "Jack' Morris III. Visitation will be on Sunday January 19th from 4:00 pm to 6:00 pm at Canale Funeral Directors. Services will be held at 11:00 am Monday at Shady Grove Presbyterian Church, followed by a reception at the church. In lieu of flowers, memorial donations may be made to Shady Grove Presbyterian Church or the Church Health Center.

The family of Carole Morris Bizot created this Life Tributes page to make it easy to share your memories.

Send flowers to the Bizot family.