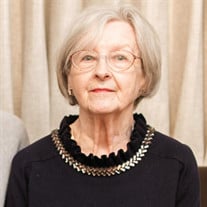 Carolyn “Janet” Taylor Strickland peacefully passed away with her family by her side on December 30, 2021, at the age of 89. She was preceded in death and now reunited with her husband of 60 years, Travis Strickland and her only daughter, Teri Strickland Gravatt. Janet was born on July 24, 1932, in Corinth, Mississippi to Alma and Richard Taylor. She lived most of her life in Memphis, Tennessee where she worked, raised her children and enjoyed spending time with her grandchildren and great-grandchildren. She was a lifelong member of Hope Church where she was the proud mother of its founding pastor. Until the very end of her life, she could be seen in the bleachers, on the sidelines or in an auditorium proudly supporting her great-grandchildren. Her family was the greatest joy of her life, and she was everything to her family. She is survived by her son and daughter-in-law, Lee and Craig Strickland of Memphis. Lovingly known as “Mamajan,” she leaves her adoring grandchildren who she loved with all her heart: Jennifer and Will Godwin, Emily and Scott Brown, Ashleigh and John Gravatt, Jr., Taylor Strickland and Tucker Strickland, all of Memphis. She will be deeply missed by her ten great-grandchildren: Scottie Brown, Chloe Goode, Reese Godwin, Stella Goode, West Brown, John Logan Godwin, Harper Godwin, Alice Gravatt, Ivy Gravatt and Mabel Gravatt. She is survived by two sisters, Joyce Clements of Oxford, Mississippi and Jane Coleman of Memphis as well as one brother, Richard Taylor, Jr. of Southaven, Mississippi. She was also preceded in death by her parents, Alma and Richard Taylor and three sisters, Jean Johnson, Joan Diette and June Mitchell. A private family graveside service will be held at the family’s request.

Carolyn &#8220;Janet&#8221; Taylor Strickland peacefully passed away with her family by her side on December 30, 2021, at the age of 89. She was preceded in death and now reunited with her husband of 60 years, Travis Strickland and her only... View Obituary & Service Information

The family of Carolyn (Janet) Taylor Strickland created this Life Tributes page to make it easy to share your memories.

Send flowers to the Strickland family.