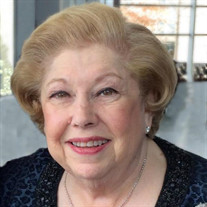 Carolyn Washer died peacefully on Sunday, November 1, 2020 in Dallas, Texas. Born October 24, 1933 in Manhattan, New York, where her father Isidor (“Irving”) worked for the Thomas A. Edison Company and mother (Anna) worked as a seamstress in the Lower East Side. Her parents named her Carolyn Jewel Dimand, a perfectly beautiful name that matched her sparkling personality and set the stage for her lifelong passion of wearing and selling exquisite fine jewelry. Carolyn’s parents moved to Memphis when she was only six months old. Memphis, Tennessee became her beloved home for 74 years of her life until she moved to Plano, Texas in 2008 to be closer to her daughter’s family. Carolyn grew up living behind her parents’ grocery store, I. Dimand Hardware & Variety, on South Trezevant in Memphis. At an early age, she gained an acute awareness of life and business values that would influence her future years. These values included: humility, empathy, charitable giving, customer service, retail sales and the value of a dollar. It was in this setting where she learned, “treat others as you would want to be treated.” Carolyn graduated from Central High School in 1951. She was art editor of the yearbook and received special permission to be the first female to take Mechanical Drawing at Central. She attended the University of Texas at Austin to study Architecture, a college major that combined her creative and mathematical talents. Ultimately missing her sweetheart, Jack Washer, she returned to Memphis to marry him in 1954. She worked for The Advertising Checking Bureau (ACB) in Memphis, verifying ad placements. Next, Carolyn launched a successful real estate career, hired by prominent Memphis realtor, Mrs. Ed (Ruth) Simmons, who recognized her outstanding selling abilities. Wanting a more predictable lifestyle, Carolyn later joined Macy’s (formerly Goldsmith’s) as a high-performing, fine jewelry salesperson and a dedicated employee for many years. Additionally, throughout her adult life, she owned and managed residential real estate across the Bluff City. She was known as a “go-getter” for her leadership, business acumen, creativity and community volunteerism. Carolyn held leadership positions and created the most distinctive decorations for such organizations and events as: Memphis Cotton Carnival parade floats, Rose Bowl Parade Puerto Rico float reassembly (after devastating wind damage while on vacation), Brenner BBG, National Council of Jewish Women, Memphis Jewish Community Center (life-sized, painted wood flowers around the outdoor swim center), Baron Hirsch 60th Auxiliary Birthday Gala, B’nai B’rith Women Mitzvah Chapter, Hadassah Memphis, Memphis Area Association of REALTORS® and Women’s Council of REALTORS® – to name a few. In Carolyn’s senior years, together with her husband, she volunteered by shopping, stocking and clerking at the resident convenience store at Plough Towers, a 150-unit, Jewish-sponsored HUD high-rise for elderly and mobility impaired Memphians. Plough Towers recognized Carolyn for her unwavering dedication as Senior Volunteer of the Year (2002) and Volunteer of the Year by the Memphis Jewish Federation (2005). Mrs. Washer was a member of Baron Hirsch Synagogue and Temple Israel. At Temple Israel, she worked on the Mitzvah Day committee from 2003-2007 providing meals to Jewish residents in the Mid-South senior living community. She doted on her immediate family, but also was a faithful caregiver to her elder relatives: Aunt Henrietta Dimand, Uncle Sol Dimand and Cousin Lee Isaacson, all of Memphis. In 2008, Carolyn moved to The Legacy Willow Bend senior living community in Plano, Texas, where she was known for her southern charm, impeccable fashion, volunteerism and love of Memphis BBQ. She was preceded in death by her spouse, Jack Washer in 1995, who she was married to for 41 years. She is survived by her children, Stanley Washer of Florida and Michelle Malish (Bobby) of Coppell, Texas; two grandchildren, Ryan Seth Washer and Jacqueline Malish, both of Memphis. The family is forever grateful to two personal caregivers, Tita and Anne, who were compassionate, respectful and faithful to Mrs. Washer in the later years of her life. Private services were held Wednesday, November 4, 2020 at Baron Hirsch Cemetery. Canale Funeral Directors had charge. The family requests that memorials be sent to: Plough Towers (http://www.ploughtowers.org), Baron Hirsch Congregation (https://www.baronhirsch.org) or Temple Israel (https://timemphis.org).

The family of Carolyn Dimand Washer created this Life Tributes page to make it easy to share your memories.

Send flowers to the Washer family.