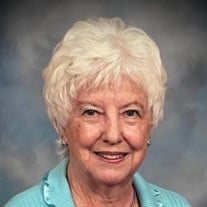 Carolynn Wenner Drzycimski October 1, 1936-December 12, 2021 Carolynn was born in Waterloo, Iowa in 1936 to Frank and Marilois Wenner. She passed peacefully into eternal life after a brief illness surrounded by loving family on the Feast Day of Our Lady of Guadalupe, this year falling on the 3rd Sunday of Advent. Carolynn lived a rich and full life. She and her husband of 24 years, Bob Drzycimski, raised four sons, Stephen, David, Jeffrey and Michael, in Memphis Tennessee and briefly in Florida. She loved music and, in her youth, was in a singing group called The Blue Notes. She played the piano and sang, even offering her gift of music to her sons at their weddings. Carolynn taught the somewhat lost art of homemaking at Immaculate Conception High School and St. Agnes Academy, often taking her baby sons into class so the girls could learn how to change diapers. She continued her education and earned a Master’s Degree in Social Work and went to work in Nursing Home Administration at St. Peter Villa in the Diocese of Memphis. Still feeling the desire to better herself while helping others, Carolynn went back to school and graduated as a Registered Nurse from the University of Tennessee. She served as a parish nurse for many, many years in Memphis and in St. Pete Beach, Florida. She went as a medical missionary on several trips to Haiti with Holy Spirit Catholic Church. She served many years on the Mid-South Fair board, was a cantor and founding member of Holy Spirit Catholic Church and volunteered for the Memphis Chapter of the Muscular Dystrophy Association at numerous Summer Camps and at the Jerry Lewis Telethon. Carolynn loved to travel the world with friends, taking trips to London, Ireland, Alaska, Holland, Cuba and Thailand among other places. She was a Disney enthusiast who landed a dream of a job when she was asked to travel to Italy to supervise the setup of an Infirmary on a brand new Disney cruise ship called The Wonder. Even as a cancer survivor and someone plagued with many serious medical struggles, Carolynn never abandoned her Catholic faith. In recent years, she developed a strong devotion to St. Padre Pio. She was Anointed and received Holy Communion shortly before passing. Carolynn was preceded in death by her son, Steve and daughter-in-law, Linda, and is survived by three sons, Dave (Leah), Jeff (Bess) and Mike (Rebecca), her brother, Bill, her sister, Kathy, 14 grandchildren and 1 great grandchild. A funeral Mass will be held on Friday, December 17th at 1:30pm at St. Louis Catholic Church in Memphis. Visitation will be held from 12 noon until 1:30pm. Burial will take place at Calvary Cemetery following the Mass.

Carolynn Wenner Drzycimski October 1, 1936-December 12, 2021 Carolynn was born in Waterloo, Iowa in 1936 to Frank and Marilois Wenner. She passed peacefully into eternal life after a brief illness surrounded by loving family on the Feast Day... View Obituary & Service Information

The family of Carolynn Wenner Drzycimski created this Life Tributes page to make it easy to share your memories.

Send flowers to the Drzycimski family.