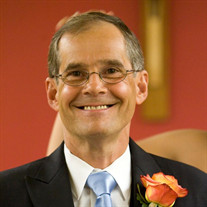 Charles Joseph Bargiachi (2/10/1956 – 2/15/2021) was born in Memphis, TN to Joseph Sylvester and Charlyne Stergios Bargiachi and was later adopted by Delores Moore Bargiachi after Charlyne’s death. He leaves behind his wife Kathleen “Kye” La Velle Bargiachi just shy of their 35th anniversary. They were blessed with three children, Denise (Keith) Laabs, Gina Bargiachi (Becca Cooper), Erin Bargiachi, and precious grandson Tucker Joseph Laabs. He is also survived by his sister Doris Morris, his sister-in-law Jane Keough (Jane Martin), and his brothers-in-law Mike La Velle (Scott Seeley) and Pete (Robyn) La Velle. He is preceded in death by all of his parents as well as his in-laws, John P. and Helen Doran La Velle. He also joins his beloved granddaughter, Bell Laabs, in a victorious reunion. Many people at different stages of Charlie’s life had a hand in raising and forming him into the man he became. Charlie was a man we are so proud to call husband and best friend, Dad, Nonno, brother, uncle, cousin, partner, fellow Cursillista, colleague, accountant, patient, neighbor, and friend. It’s hard to encapsulate all of Charlie in one place, as there were so many special things about him. He was a humble man who lived his values, strove to be God’s light to others, and in all instances he made a point to be there for his family. When people talk about how much they have loved Charlie, it’s a collection of memories and little mannerisms that made him who he was. He loved constantly referencing songs, making his world-famous margaritas, and dropping life advice in the form of clever sayings. Some of Charlie’s favorite memories involve holiday traditions and family vacations, making the pilgrimage to Lourdes in 2019, dancing with his family, and watching his small business grow. Charlie graduated from the University of Memphis and was a member of Lambda Chi Alpha Fraternity. He later obtained his Masters of Science in Taxation to further contribute to the accounting firm, Lenahan, Smith & Bargiachi, PC, which he helped to form with Jim Lenahan and Tony Smith in 1989. In his life, Charlie was dedicated to many things, driven by love of family, faith, and community. He was an active member of St. Francis of Assisi Catholic Church since its inception, serving on church boards and later becoming a lector and Eucharistic Minister. He also pursued his passions of service with Knights of Columbus in our early family life and later for the unhoused with Room in the Inn. As an avid Tiger fan, Charlie was a season-ticket holder and enjoyed attending basketball and football games with dear friends. He became a St. Louis Cardinal fan as a young boy with a flashlight in the dark listening to the radio when he was supposed to be asleep and was proud to be in the clubhouse for their 2011 World Series championship. He was a founding member of the Ridgeway football team, a Boston Marathon qualifier, and enjoyed coaching his daughters’ various sports teams. As an absolute gentleman, he lived his life according to the pillars of love, respect, and care for others first. Throughout his long cancer journey, he remained steadfast in his love of God and shared his faith with all who would listen. In his honor, we will carry his values with us and try to emulate his unwavering love for others. If you are moved to do something in Charlie’s name, please donate to Room in the Inn (RITI) at St. Francis of Assisi. (8151 Chimneyrock Blvd Cordova, TN 38016) If you would like to share special memories or words about Charlie to be included in a memory book for the family, please email them to [email protected] Due to COVID-19 we will be having an in-person celebration of Charlie’s life once it’s safe to gather. In the meantime, we encourage you to join us virtually for his funeral mass on Monday, February 22, 2021 at 1:30 pm CST. You can access the livestream by going to youtube.com and searching “St Francis Cordova.” The video will be on the homepage of the parish channel. If this time is inconvenient, a downloadable recording will be made available to those who request it at [email protected]

Charles Joseph Bargiachi (2/10/1956 &#8211; 2/15/2021) was born in Memphis, TN to Joseph Sylvester and Charlyne Stergios Bargiachi and was later adopted by Delores Moore Bargiachi after Charlyne&#8217;s death. He leaves behind his wife Kathleen... View Obituary & Service Information

The family of Charles Joseph Bargiachi created this Life Tributes page to make it easy to share your memories.

Send flowers to the Bargiachi family.