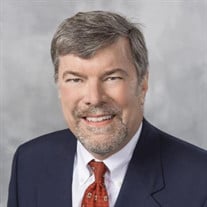 Charles Shannon Hayden 6/12/1957 - 10/1/2021 The Midsouth Logistics & Transportation Community has lost an exceptional friend and leader. Following a valiant battle with cancer, Shannon passed away peacefully at home with his family around him. Shannon Hayden was born in Mayfield, Kentucky to Charles and Rubye Hayden. The oldest of four siblings, they grew up in Fancy Farm, Kentucky. Shannon grew up in a large extended family with over 28 first cousins. He was a member of St Jerome Catholic Church and worked the famous Fancy Farm picnic yearly. The family moved to Memphis, TN when Shannon was thirteen. It was in Memphis he met his lifelong friend and partner in crime Bob Wilkinson. A 1975 graduate of Sheffield High School, Shannon entered the United States Navy as a Seabee. His travels took him to Rota, Spain, Diego Garcia, and his favorite- Bermuda. It was in Bermuda that Shannon gained his love of scuba diving. Following his five year service in the Navy, Shannon began his 30 year career at Federal Express Corporation. Beginning with Offloading of Falcon aircraft, Shannon moved on to New Orleans, LA as a Station Manager, back to Memphis as Hub Operations Manager, Global Operations Command Center Manager, Hub Operations Director and Senior Manager Roles. During his distinguished career, Shannon was a mentor and friend to many. He facilitated aspiring management candidate training all over the country. He was awarded the Five Star Award for outstanding leadership and contributions to FedEx. The FedEx family has always surrounded Shannon, Lesa and the boys. Shannon attended University of Memphis and Christian Brothers University in Memphis, TN. Following his retirement from FedEx, Shannon accepted the role of Senior Operations Manager with McKesson Corporation at the National ReDistribution Center in Olive Branch, MS. Shannon again led his teams to great success in this new role. Shannon was instrumental in leading the McKesson Military Resource Group to provide support to veteran causes, build homes for veterans through Habitat for Humanity, assist the West Tennessee Veterans Cemetery and most recently lead MMRG members to Washington, D.C. to lobby members of Congress regarding veterans transitioning into the work place following their service. Shannon Hayden was a special individual and loved by many. He sparked that ever present devious smile. Their lifelong friends and coworkers could always count on Shannon for a grin, a laugh and a very colorful turn of phrase. He was lifelong college basketball fan, a University of Memphis Tiger Fan, St. Louis Cardinals Baseball team and The Green Bay Packers rounded out his favorite teams. Lesa and Shannon so enjoyed the UofM Tiger Football recent run to the Cotton Bowl in Dallas. No one held Shannon’s heart more than the love of his life and wife of 26 years, Lesa. They shared careers at FedEx and McKesson. More than that, they shared a life of love, passion, travel, service and three wonderful sons. They shared the true love of two old souls. Shannon and Lesa were married in Memphis, TN at St. Mary’s Catholic Church. Early in their marriage, they struck a deal— Lesa would take care of any children and he would do the cooking. Sounded like a deal… not quite…..Shannon had a repertoire of 3: steaks, ribs and his well known Father & Son Pizza. (Chef Boyardee mix). Luckily for all of us, Shannon found the Food Network in 1995 and the rest was history. Lesa loved to post pictures of Shannon’s favorites including his Bad Ass Bolognese. For the majority of their time together, they worked different shifts. Shannon believed this made their time together more special. In the last few years, they spent time traveling to Hawaii, Chicago, New Orleans, Mexico, Spain, Italy and Lesa’s hometown of New York City. They held hands everywhere as their personal commitment of love to each other. For those that know the story, Shannon was Lesa’s Star in the East. Shannon is most proud of his amazing sons. The three boys have always brought joy, laughter, pride and some chaos. Craig and Pierce are strong, loving and dedicated husbands and fathers. They have always looked out for their younger brother Cameron as he matures and grows into his future. This family is one of love and service to each other, community and country. Shannon is preceded in death by his parents Charles R. and Ruybe L. Hayden, brother Thomas S. Hayden (Melanie). Shannon is survived by his loving wife, Elesa Ann (Lesa), and sons Craig Alan (Shonda), Pierce Hutchen (Robyn) and Charles Cameron. Six grandchildren: Rhiannon, Sydney, Craig II, Kaylee, Reece and Presley. Additionally survived by sister Suzanne Sheffield (Chris) and brother Romy Hayden (Pam), nieces, nephews, cousins, aunts and uncles and a host of friends. Visitation will be 5-7 p.m. Tuesday, October 19, 2021 at Canale Funeral Directors. Visitation will also be 10-11 a.m. Wednesday October 20, 2021 at Catholic Church of the Incarnation, 360 Bray Station Rd, Collierville, TN with the funeral to follow at 11 a.m. Internment will be at the West Tennessee Veterans Cemetery.

Charles Shannon Hayden 6/12/1957 - 10/1/2021 The Midsouth Logistics & Transportation Community has lost an exceptional friend and leader. Following a valiant battle with cancer, Shannon passed away peacefully at home with his family around... View Obituary & Service Information

The family of Charles Shannon Hayden created this Life Tributes page to make it easy to share your memories.

Send flowers to the Hayden family.