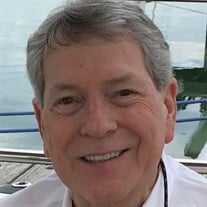 Deacon Charles (Chuck) Leadlay Lightcap, 72, went home to be with his Heavenly Father on Monday, April 20, 2020. Chuck suffered from a heart condition from the time he was a young man and his passing was caused by this disease. He is resting now peacefully in the arms of our loving Father whom he served faithfully on this earth. Chuck was born on June 26, 1947 in Santa Monica, CA to Everett and Catherine (Cogley) Lightcap. He graduated from Saint Monica High School and attended Santa Monica City College while employed in the retail building materials trade. At age 19 he was recruited by the Kohler Co. for a sales position and eventually moved to Kohler, WI. Chuck later became worldwide Marketing Manager for Special Products and New Markets at Kohler Co. In 1982, he was hired by The Vollrath Company, Sheboygan, WI, and began his long association as a Marketing, Human Resource, and Corporate Development Officer, Director, and CEO of several subsidiaries. In 1985, he and his family relocated to Jacksonville, FL to run the clothing division of North Sails Group. In 1989, he became President of Vollrath Group, Inc., headquartered in Gallaway, TN. In 2001, he was elected to the Windway Capital Corp. Board of Directors, Sheboygan, WI, the parent company for all world-wide operations, after having served previously on the Boards of The Vollrath Company, Norths Sails and Vollrath Group. Chuck continued to assist the parent company as a member of the board of directors and in developing new business strategies. Chuck was a devoted husband of 50 years to Lyn Ann (Martin) Lightcap, loving father to Charles Leadlay Lightcap III, and adoring grandfather to Nicholas Taylor Lightcap (wife Cali), and Chase William Lightcap. He is further survived by his sisters Terry Briggs, Patrice Bolan, and Meg Lightcap, his brother Peter Lightcap (wife Angela), nephews Kern, Thomas, and Everett, and nieces Jenny, Annie, Pam, Nicole and Christy. He is also survived by his sister-in-law Leslie Carpenter, niece Kari, and nephew Todd. Chuck and Lyn are members of St. Francis of Assisi Catholic Church in Cordova, TN where Chuck served God and the congregation in development and through his devotion as a Deacon. The family wishes to extend special thanks to Dr. Frank McGrew III, Cardiologist, and Tammy West, Nurse Practitioner of Stern Cardiovascular, Memphis, TN; to the clergy brotherhood in the Diocese of Memphis, TN; to the Kohler family, Windway Capital Corp., The Vollrath Company, North Sails, and the Kohler Company. In lieu of flowers, the family suggests donations in Chuck’s honor to the American Heart Association or to National Right to Life. Chuck will be interred at Calvary Cemetery, Memphis TN, in a special section reserved for clergy. There will be a brief private graveside service officiated by his dear friend, Deacon Bill Davis and attended by a small group of ten family members and friends, in accordance with Covid-19 guidelines. In good times, at a later date, there will be a Mass and celebration of his life at the Cathedral of the Immaculate Conception in Memphis, to which his many friends and extended family will be invited. Details will be provided when they are available.

Deacon Charles (Chuck) Leadlay Lightcap, 72, went home to be with his Heavenly Father on Monday, April 20, 2020. Chuck suffered from a heart condition from the time he was a young man and his passing was caused by this disease. He is resting... View Obituary & Service Information

The family of Charles Leadlay Lightcap created this Life Tributes page to make it easy to share your memories.

Send flowers to the Lightcap family.