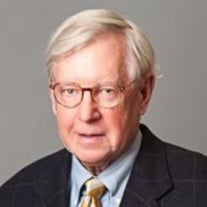 Charles Dow McVean, a committed Memphian, died on June 6, 2021. Charlie’s passion was unmistakable. His drive, insatiable. His vision, innovative. And his entrepreneurial spirit, unquenchable. Whether family, business, philanthropy, inventive ideas, or civic advances, he treated them equally with his passion, drive, commitment, and tireless energy. He was born on January 10, 1943 in Memphis, Tennessee. His mother, Ella, was a well-known educator and his dad, Charles, a civil engineer. After graduating from East High School, he graduated from Vanderbilt University, cum laude, majoring in Philosophy and minoring in Economics. Charlie is survived by his wife, Kay, and his four children, Katherine Kaelin (Bill), Courtney McVean, Dow McVean (Nikki), and Gwen Coffey (Jordan), eleven grandchildren and four great grandchildren and his younger brother John ( Debbie). McVean's business career began with Cook Industries in Memphis, Tennessee, then the Louis Dreyfus Corporation of New York City, two large, international physical commodities trading companies. Subsequently, McVean was a principal of Refco, Inc., a major Chicago-based futures trading firm. In 1986, McVean Trading and Investments, LLC began business in Memphis, Tennessee with Charlie as Chairman and CEO. The company conducts extensive research in livestock and meats, grains and oilseeds, and global macroeconomics. McVean Trading manages investments for clients worldwide, and maintains foreign consultants in Beijing, Osaka, and Geneva. As notable as his business accomplishments and accolades were, it could not satisfy his desire to advance his hometown of Memphis. His simple, but innovative creation of Peer Power has an incalculable impact on the educational advancement of Memphis’ public high school students and their future. His drive to create the Big River Crossing, once considered impossible, but now stands as a major civic and tourist asset, yet again illustrates the power of his passion, vision, drive, energy and willpower. In recognition of his life's work, he was inducted into the Society of Entrepreneurs in April 2011 and awarded Master Entrepreneur in April of 2020. In 2007, he was named Humanitarian of the Year by The Memphis City Council Funeral Services will be held at 3:00 Wednesday, June 9 at St. Michael’s Catholic Church (3863 Summer Ave). In lieu of flowers, the Family asks that any donations be made to the Peer Power Foundation (850 Ridge Lake Blvd. Suite 1 Memphis, TN 38120 - PeerPowerFoundation.org)

The family of Charles Dow McVean created this Life Tributes page to make it easy to share your memories.

Send flowers to the McVean family.