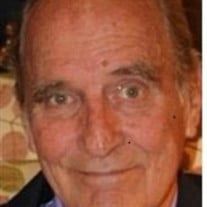 Charles Thomas Schaffler, age 84, of Memphis, Tennessee, passed peacefully from this life on September 26, 2020 surrounded by his loving family. He was preceded in death by his devoted parents, John Leopold Schaffler, Sr. and Ida Mae Robinson Schaffler; sister, Rosemary Ozanne; brother, John L. Schaffler, Jr., and daughter, Kelly Ann Schaffler. He was also preceded in death by the mother of his children, Barbara Cantrell McAlpin. Charlie was born in Memphis, grew up in Little Flower parish and attended school there. He was a 1954 graduate of Christian Brothers on East Parkway. During his years as a Brothers Boy, Charlie excelled in the classroom and as a leader among his peers, actively participating in various student clubs and organizations. A gifted athlete, Charlie also lettered in football, basketball, and baseball for the Brothers. He went on to attend the University of Notre Dame, and remained a devoted fan of the Fighting Irish throughout his lifetime. Over the years, Charlie enjoyed traveling back to South Bend with his children and grandchildren for football games, and these trips would become a treasured family tradition. Charlie worked in securities as a municipal bond salesman during the late sixties and seventies and was instrumental in training new salesmen. After leaving the securities business, he would manage the employees’ lunchroom at the old Commercial Appeal on Union Avenue until it closed its doors in the mid-eighties. A proud and active Christian Brothers alumnus, Charlie would remain lifelong friends with many of his high school classmates and enjoyed monthly alumni luncheons with pals from his CBC days. His love for sports also continued well into adulthood. He was a league bowler and a talented golfer. Stories from many memorable rounds of golf with his sons and nephews would become part of “Schaffler family lore” to be retold whenever friends or family gathered. He especially enjoyed playing with his sons and classmates from the class of ’54 in the annual CBHS Alumni Golf Tournament. Charlie also had a lifelong passion for baseball, cheering on his beloved St. Louis Cardinals until shortly before his death. Never one to sit on the sidelines, Charlie was an energetic player in the Fountain of Youth and Hernando Desoto Baseball Leagues, where he played until the age of 64, and was later inducted into the Hernando Desoto Baseball League’s Hall of Fame. He was a communicant at St. Louis Catholic Church for over 50 years, where he faithfully partook in Eucharistic Adoration and sang in the choir. He also enjoyed monthly luncheons with the St. Peter Catholic Church “Saintly Seniors” group, organized by his longtime friend and companion, Glenda Jones. Friends and family will fondly remember Charlie for his charming personality, quick witted (and often mischievous) sense of humor, and an endearing humility that was a hallmark of his character from an early age. Charlie was affectionately known as “Uncle Super” to his nieces and nephews, and “Poppa Charlie” to his many grandchildren. He is survived by his daughters Bitsy Quinn (Danny), and Shawn Demos (Chris), and sons Chuck and Jack Schaffler, all of Memphis, Tennessee, and daughter Mimi Foster of Mobile, Alabama. He also leaves his beloved grandchildren, Emily Morton (Jesse), Patrick Quinn, Brian Quinn (Millie), Ben Powell, Elisha Pate, Gracey Foster, and Joshua Foster, as well 4 great-grandchildren and many nieces and nephews who will forever cherish his memory. The family will receive friends to celebrate Charlie’s life on Friday, October 2, 2020 at St. Louis Catholic Church. Visitation will begin at 12:45 p.m. with a Mass of Christian Burial to follow at 1:30 p.m. Interment will be at Memorial Park Cemetery. The family would like to express their heartfelt gratitude to the compassionate caregivers and staff of Compassus Hospice. In lieu of flowers, the family requests that memorial contributions be sent to The Kelly Schaffler Scholarship at Saint Agnes Academy, Christian Brothers High School, Madonna Learning Center, or the Monsignor Paul W. Clunan Endowment Fund at St. Louis Catholic Church.

Charles Thomas Schaffler, age 84, of Memphis, Tennessee, passed peacefully from this life on September 26, 2020 surrounded by his loving family. He was preceded in death by his devoted parents, John Leopold Schaffler, Sr. and Ida Mae Robinson... View Obituary & Service Information

The family of Charles Thomas Schaffler created this Life Tributes page to make it easy to share your memories.

Send flowers to the Schaffler family.