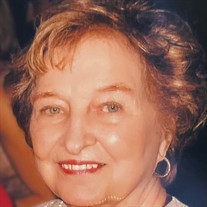 Clara Catalina Vescovo of Memphis died February 27, 2021. She was born on March 24, 1930, in Clarksdale, Mississippi, the seventh of eight children. Her parents were Augusto and Giustina Catalina who had immigrated from Ancona, Italy. As a young child, the family moved to Turrell, Arkansas, to farm cotton. Her parents learned English from their children and the children Italian from their parents. She graduated valedictorian from Turrell High School. After high school, she moved to Memphis to attend Miller Hawkins Business College, taking shorthand and typing classes and scoring the highest marks in her class. She lived in a Memphis apartment and began work as a secretary. Clara met Louis Vescovo at the wedding of his sister to the nephew of Clara’s sister. They fell in love and were married in 1952. The two of them had five children and eventually settled in the Whitehaven area of Memphis. She and her husband owned small businesses in Whitehaven, including Granny’s Market and Whitehaven Liquors. Her husband died in 2017 after sixty-five years of marriage. A devout Catholic, Clara was a faithful parishioner of St. Paul’s Catholic Church and later St. Louis Catholic Church. An active volunteer, she washed hair of residents at the Ave Maria Home and helped make ravioli to support her children’s school. A founding member, along with her husband, of Bella Vista Country Club, she enjoyed socializing and playing golf with lifelong friends. She was a competitive and formidable card player, especially bridge, and did her crossword puzzles in pen. She enjoyed teaching card games to her children and grandchildren but would never let them win, which made beating her all the more satisfying. She was an excellent cook, with an unique ability to mix southern and Italian dishes into the same meal. Her bounet, a northern-Italian dessert, was a favorite. She made family a priority and insisted that her children and grandchildren do the same. She was happiest at gatherings of her large and extended family. So it was fitting that at the end of her life, she was surrounded by family. She is survived by five children: Louis (Debbie), Steve (Susan), Barry (Jennifer), Melanie Bell (Jack), and Chris (Anna), her nine grandchildren, and her twelve great-grandchildren. She is also survived by her dear sister, Dorothy Barnes, of West Memphis. She was predeceased by brothers, Chester, Nelson, and Evo, and sisters, Mary Stignani, Faye McFarland, and Marie Shinabery. The family would like to thank Clara’s caring nursing aides, Nicole Davis, Teresa Hudson, Brenda Fondren, Rhonda Adams, and Jacqueline Brooks. Services will be held on Thursday, March 4, 2021, at St. Louis Catholic Church with visitation at 11:00 a.m. in the Clunan Center and funeral Mass at 1:00 p.m. in the church. CDC guidelines will be followed, but if you are at all uncomfortable attending, the family understands and will appreciate thoughts and prayers in your absence. In lieu of flowers, the family asks that donations be made to The Archbishop J. Peter Sartain Endowment Fund for St. Paul Catholic School, the Ave Maria Home, or the charity of the donor’s choice.

Clara Catalina Vescovo of Memphis died February 27, 2021. She was born on March 24, 1930, in Clarksdale, Mississippi, the seventh of eight children. Her parents were Augusto and Giustina Catalina who had immigrated from Ancona, Italy. As a... View Obituary & Service Information

The family of Clara Catalina Vescovo created this Life Tributes page to make it easy to share your memories.

Send flowers to the Vescovo family.