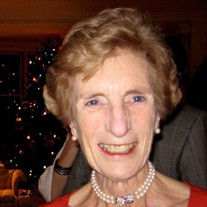 Daphne Harriet Huger Beazley Boyle Daphne Harriet Huger Beazley Boyle died on April 3rd 2020 at the age of 88. She was born in Simla, India on the14th of June 1931 to Col Walter Beazley, of the 54th Sikhs and the Northwest Frontier Force; and Harriet Huger Wilkie, a glamorous English/American hailing originally from Mobile, Alabama. Her sister, Elizabeth Allen Wilkie Renner predeceased her. The Beazley family returned to England in 1931 and settled in Liss, Hampshire. Her childhood was defined by the war years. After finishing her education at The House of Citizenship in London she worked at the War Office for M15. She would not engage in conversation about that post. Her childhood friend, Mary Rose Beaumont, recalls their lives in London this way, “At 59 Knightsbridge, our flat at the top of a long flight of steps, became legendary. We used to go out to cocktail parties, always hoping we would get asked out to dinner, but, if we weren't, we went home to eat corn flakes at the kitchen table. During this time Daphne went to a mysterious office in Curzon Street, which I think might have been MI5 but I don't know. The end of the story you know: Snowden Boyle Jr. came over and swept her off her feet and the rest is history.” In the 1950’s she traveled to Memphis to visit her mother’s first cousin, Harriet Smith Van Vleet where she met her future husband B. Snowden Boyle. They married in September 1953 and were devoted to each other for their 56 years of marriage. She relished all that her new life in America had to offer. She was an avid volunteer, eventually chairing many of the organizations which she joined including, The Memphis Garden Club, The Crippled Children’s Hospital Foundation (now the Children’s Foundation of Memphis.) and The Antiquarian Society. She served on the board of the Garden Club of America and was a member of the Junior League of Memphis and Chevalier du Tastevin. She was well known for her gaiety, beauty and good taste. She was an outstanding dinner party hostess serving such delicacies as crab souffle. She leaned towards dramatic outlandish costumes for Cotton Carnival activities. She once dressed as the cover of Herp Albert’s album, “Whipped Cream and Other Delights.” Daphne and Skeets hosted annual dove shoots where she was known as “Annie Oakley” for her skills with her 20 gauge. In the 1970’s, with her friend, Jean Price, she started a catering business specializing in homemade cannelloni. More than all of these interests and accomplishments she was loving, non-judgmental, generous and kind. In her last years she was helped by devoted caregivers, Elgenia Lane, Yvette Horne and Jo Linda Buckhanon. The family also appreciated the leadership and assistance from Lesa Hart. She leaves her two daughters, Harriet Huger McFadden of Memphis and Daphne Evelyn Hanbury of West Sussex, England, their spouses Jake McFadden and Nigel Hanbury, and by her grandchildren McKay McFadden, Lucy McFadden and Annie Stroud, George Hanbury, Lilly Hanbury and Clementine Hanbury. There will be a celebration of her life graveside. Please send memorials to Calvary Episcopal Church or The Dixon Gallery and Gardens.

The family of Daphne Harriet Huger Beazley Boyle created this Life Tributes page to make it easy to share your memories.

Send flowers to the Boyle family.