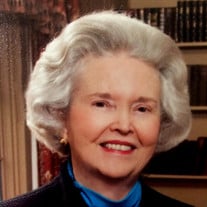 Diane McMillan Wellford, 81, a longtime resident of Memphis, TN, passed away in Lake Oswego, OR on November 6, 2019 of Alzheimer’s disease. She is survived by her husband of 59 years, Walker Lewis Wellford III of Memphis and two children, Lauren Wellford Deming (husband Dr. Will Deming) of Portland, OR and Walker L. Wellford IV (wife Cheryl Dakin Wellford) of Atlanta, GA. She also leaves five grandsons: David and Jonathan Deming, and Walker, William, and Jack Wellford. She was predeceased by her brother Hugh Laurens McMillan. She is also survived by sister-in-law Sharon McMillan, niece Kim McMillan Norton, nephew Alan McMillan and a large extended family. Diane was born on February 7, 1938, in Little Rock, AR, to Hugh and Kathleen King Shelton McMillan. She graduated from Little Rock Central High School where she served as vice president of the student body and earned a scholarship to attend Southwestern At Memphis (now Rhodes College). While earning her BA in History, she was an active student, serving on the Sou’wester newspaper staff, as a Kinney Program volunteer, and as a class officer. She was president of Chi Omega, the sweetheart of Sigma Alpha Epsilon, and was voted Miss Southwestern. Diane loved teaching, and during her twenty year career she worked at Snowden Elementary, St. George’s Day School, and Shrine School where her passion for teaching children with disabilities led her to earn a master’s degree in Special Education at Memphis State (now University of Memphis). In 1990 she was honored as Teacher of the Year by the Tennessee Humanities Council. For several years she served as a VISTA volunteer, helping start the Metropolitan Interfaith Association (MIFA)’s home delivered meals program, and as a volunteer through the Memphis Junior League. She enjoyed being an alumnae advisor to the Chi Omega chapter at Rhodes for many years. She was raised in a Christian home and at the time of her death had been a member of Idlewild Presbyterian Church, Memphis, for 61 years. At Idlewild she was an ordained elder, an officer in Presbyterian Women and a founder of the church’s daycare center. Through the years at Idlewild she particularly enjoyed her women’s circle, serving on the wedding committee, and attending family camp at NaCoMe. She dearly loved her church family. Diane excelled at encouraging people. She was gracious, giving, loving, and a great listener. She enjoyed cheering the Memphis Grizzlies, reading good books, and snacking whenever she felt like it. Diane’s family wishes to thank the fine people from Attendant Care Services and The Springs at Carman Oaks who provided her such genuine loving care in her final years. Services will be held Friday, November 15 at 11 a.m. at Idlewild Presbyterian Church, 1750 Union Avenue, Memphis, 38104. In lieu of flowers, the family asks that donations be made to Idlewild or to the charity of the donor’s choice.

Diane McMillan Wellford, 81, a longtime resident of Memphis, TN, passed away in Lake Oswego, OR on November 6, 2019 of Alzheimer&#8217;s disease. She is survived by her husband of 59 years, Walker Lewis Wellford III of Memphis and two children,... View Obituary & Service Information

The family of Diane McMillan Wellford created this Life Tributes page to make it easy to share your memories.

Send flowers to the Wellford family.