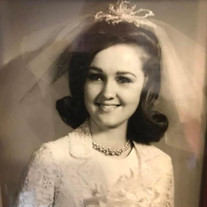 To know, know, know her was to love, love, love her, and we did! After a long struggle with cancer and dementia, Dolores Jo Banner Combs passed away February 17, 2022, two weeks after her 80th birthday. An energetic, funny, kind, and deeply empathetic woman, she was adored by everyone she ever met; with few exceptions, she adored them back. Throughout her life, she was sustained by a deep and abiding faith in Jesus Christ; that faith will bring comfort to all who knew her as she passes to her new--and permanent--home in heaven. Sweetwater, Texas, wasn't the glamour capital of the world in the 1940's, especially not for a young girl being raised by a single mom, in and out of public housing. But from humble beginnings, Dolores let her native curiosity carry her abroad--literally and figuratively. After graduating from Sweetwater High School in 1960 and working as a switchboard operator for Southwestern Bell, she married Andy Combs in 1965, and the two began the adventure that would last the rest of her life. Andy's remaining academic career carried them to Texas A&M University. Early professional opportunities led them to Memphis, Tennessee, followed by St. Louis, Missouri, and Midland, Michigan. A tour of duty with the US Army landed them at Fort McClellan in Anniston, Alabama, where their son Clay was born in 1970. But a long period of stability commenced with the move to Memphis, Tennessee, in 1971. With the exception of a four-year stint in the 1990's, when they moved back to Texas for work with BASF, Brownsville, Tennessee, would be the couple's permanent home; First Presbyterian Church in Brownsville would be their church home. It didn't take long for Dolores's travel bug to infect whole family. Over the years, they enjoyed seeing much of the U.S., Canada, Mexico, and Western Europe. When not on the go, Dolores let her broad interests guide her into courses and other instruction in piano, guitar, flower arranging, cross stitch, league bowling, calligraphy, painting, ceramics, Spanish, international cooking, golf--even Karate! A lifelong love of old movies and TV series--comedies in particular--kept her laughing. She frequently paid that favor forward to anyone who was around--indeed, an evening with Dolores often felt like being caught in an episode of I Love Lucy. In a good way! Her diagnosis of ovarian cancer in 2012 led to a painful struggle with surgery and chemotherapy, but ultimately gave her additional years with friends, family, and church family. During her final years, she was able to age in place with the faithful assistance of a small team of caregivers. The family would like to extend special thanks to Lisa, Teresa, Martha, Jannie, and Kaye; and from Avalon Hospice, Kala, Nicole, Robin, Elizabeth, and Wanda. Dolores is survived by her husband of 56 years, Andy Combs, of Brownsville, Tennessee; her son Clay, of Memphis, Tennessee; her brother Johnny Lee Banner, of Astatula, Florida; and her sister Sharon, of Lampasas, Texas. Dolores was interred at West Tennessee Veterans Cemetery in a family-only ceremony. The family requests memorials to be sent in care of First Presbyterian Church, 109 W. College St., Brownsville, Tennessee 38102, for collection and forwarding to agencies engaged in ovarian cancer research. RIP DOLORES LOVED IN LIFE AND DEATH

To know, know, know her was to love, love, love her, and we did! After a long struggle with cancer and dementia, Dolores Jo Banner Combs passed away February 17, 2022, two weeks after her 80th birthday. An energetic, funny, kind, and deeply... View Obituary & Service Information

The family of Dolores Jo Banner Combs created this Life Tributes page to make it easy to share your memories.

Send flowers to the Combs family.