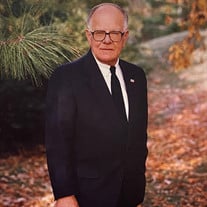 Donald Malmo, 93, passed away peacefully at home September 7, 2021, surrounded by his entire family. He is preceded in death by his parents Gerald and Adeline Malmo, his brother, Gerald Michael Malmo, Jr. and his sister, Patricia Malmo Gabrieleschi. He was born in Fargo, ND and moved to Memphis at the age of 6. He became an Eagle Scout and graduated from Central High School. There he was known as “Mighty Mouse” due to his football prowess, which gained him a scholarship to Purdue University. Due to a knee injury he transferred to Washington and Lee University where he made lifelong friends and graduated in the top of his class. Following Washington & Lee, he married Elma Kirkpatrick. Don then went into the Navy as a Lieutenant aboard the USS Lindenwald. He was deployed to the North Pole where he was instrumental in helping establish the early warning radar system. His Navy days were some of his happiest and shaped his staunch patriotism for his country. He was a member of the Naval Reserve. Upon leaving the Navy, Don enrolled in Vanderbilt Law School and graduated in the top 10% of his class as a member of the Order of the Coif. He met another young lawyer by the name of Lewis Donelson who persuaded him to join what would become one of the largest law firms in the South, Baker- Donelson. While at Baker- Donelson, he represented the City of Memphis, MLGW, First Tennessee Bank, and hundreds of small companies that flourished under his guidance. One such firm was Duncan-Williams, Inc., where he worked for over 40 years. Upon the death of its founder, A. Duncan Williams, Don made a solemn vow to “look after Duncan’s family as well as his firm”. Don liked to say he thought he did a pretty good job at both. Throughout his career he was offered various board positions which he always turned down. He would quietly suggest a younger, up and coming lawyer instead, thus forwarding the career of many colleagues unbeknownst to them. Don had many titles and honors, but his favorite was being “Grandaddy” to his 6 loving grandchildren whom he adored. He taught many young children to hunt and fish at his farm in Como, Mississippi where he grew prized blueberries. He was a constant at his children’s and grandchildren’s activities and took pride in the fact that he only missed one of his four grandsons’ football games. He is survived by his loving wife of 68 years, Elma Kirkpatrick Malmo; his brother, John Malmo (Betty); his son, Donald “Andy” Malmo, Jr. (Nancy); his daughter Elizabeth Malmo Carr (Victor); his daughter Murrey Malmo Watkins; his grandchildren Donald “Donnie” Malmo, III (Elizabeth); Roger Kirkpatrick “Kirk” Malmo (Sydney); Sarah Rose Watkins; Jace Watkins; David Watkins and Elizabeth Carr Rudolph (Myers). He also leaves 3 great-grandchildren who brought him great joy, as well as numerous nieces and nephews. He deeply cared for the entire Duncan-Williams family especially Carolyn, Duncan, and Emily Williams Dunn. He was a presence that cannot be matched and made an impact on countless people. A part of the “Greatest Generation”, he was truly the greatest. Services will be Monday, September 13 at 1:00 pm at Church of the Holy Communion. Masks are required. In lieu of flowers, memorials can be sent to the Church of the Holy Communion, where he served on the vestry for many years, or to a charity of the donor’s choice.

Donald Malmo, 93, passed away peacefully at home September 7, 2021, surrounded by his entire family. He is preceded in death by his parents Gerald and Adeline Malmo, his brother, Gerald Michael Malmo, Jr. and his sister, Patricia Malmo Gabrieleschi. He... View Obituary & Service Information

The family of Donald Anthony Malmo created this Life Tributes page to make it easy to share your memories.

Send flowers to the Malmo family.