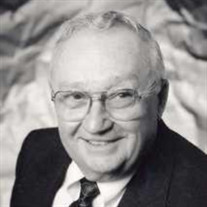 Donald Arthur Nobert, Sr. passed away peacefully in his sleep one (1) day prior to his 94th Birthday on November 3, 2021. Donald was born in Chicago, Illinois on November 4, 1927 and grew up on the north side of Chicago in Oak Park, Illinois. He attended St. Giles Elementary School where he was educated by the Dominican nuns throughout grade school. Don and his family moved to Memphis in 1942 where Don enrolled in CBC, now CBHS. Here he found a home with the Christian Brothers who he loved and admired throughout his entire life. After his graduation from CBC in 1946 he attended Spring Hill College, a Jesuit college in Mobile, Alabama and upon graduation returned to Memphis. Don had a great love of all sports. He was an accomplished bowler. He spent many nights and years in leagues at the Memphis Catholic Club where he made many friends. In the 1960s Don began a long career in the food brokerage business. First partnering with Lee Saunders and Al Stukenborg, In 1986, with the support of his wife Jean, Don ventured out on his own and formed Nobert Marketing. Eventually his sons, Donald, Doug and Gary joined him at Nobert Marketing. Through his and with his wife the business thrived and evolved into a major regional brokerage firm. If you ever asked Don about his greatest achievement in business, he would say was working with his family, especially his sons, and the many friends he made along the way. To him, these things were always much more gratifying and important than any sale or profit. Don was preceded in death by his parents, Louis Edward Nobert and Grace O’Malley Nobert and his sister Lorrane Hough, as well as his wife of forty-seven (47) years Jean Boone Nobert. Don also leaves behind his four children: Donald Nobert (Marci), Douglas Nobert (Angela), Gary Nobert (Karen) and Len Getz (Joe). All of his grandchildren were a great source of his pride and excitement. He loved hearing their stories, their interests, their troubles and accomplishments. Don was affectionally known as Pawpaw to all of his grandchildren whom he cheered on through their many athletic events and performances, attending hundreds of games, plays, races and performances. He was known by all his grandchildren’s teachers, friends and coaches because of the positive energy and spirit he shared and spread. His jokes, laughter, warm smile and affection will be missed by all of his grandchildren: Webster Nobert, O’Malley Nobert, Isabel Nobert, Boone Nobert, Kacey Nobert, McKenzie Nobert, Myers Nobert, Hayes Nobert, Ellie Nobert, , and Brennan Getz and John Getz. They will always remember his loud cheers from the stands and from the audience as well as his thoughtful prayer cards, prayer books and phone calls. Don was a devout communicant of Holy Spirit Catholic Church and later St. Louis Catholic Church attending mass daily. He is a proud member of Christian Brothers High School Hall of Fame which recognized Don for his service to others. Don’s love of family and friends was also reflected in his great concern for others less fortunate than him. In addition to passing along his infectious positive attitude to all people around him on a daily basis, Don spread his positive spirit through a life of service. His tireless work and donation of time, talent and treasure will be greatly missed by the St. Vincent DePaul Soup Kitchen, the Poor Clares Ministry and the Catholic Prison Ministry. Don lived out his spiritual service to others in his everyday life through his prayer cards and prayer lists for family, friends, classmates and those with any illness or troubles. All the souls in purgatory will miss Don’s daily prayers and thoughts. Don’s love of family and friends was second only to his love of Jesus Christ. Don never met a stranger and loved to laugh and joke with others. Every day he was alive was a great day, every meal was delicious and he made everyone else’s day better. He was a blessing to everyone he touched. The family requests that any gifts be sent to St. Agnes Academy-St. Dominic School or Christian Brothers High School in Memphis, Tennessee. Visitation and rosary will be held on Thursday, November 11, 2021 at the Clunan Center at St. Louis Catholic Church from Noon to 1:30 pm, followed by a funeral mass at St. Louis Catholic Church beginning at 1:30 pm. After a graveside service will be held at Forest Hill Cemetery on Whitten Road.

Donald Arthur Nobert, Sr. passed away peacefully in his sleep one (1) day prior to his 94th Birthday on November 3, 2021. Donald was born in Chicago, Illinois on November 4, 1927 and grew up on the north side of Chicago in Oak Park, Illinois.... View Obituary & Service Information

The family of Donald Arthur Nobert Sr. created this Life Tributes page to make it easy to share your memories.

Donald Arthur Nobert, Sr. passed away peacefully in his sleep...

Send flowers to the Nobert family.