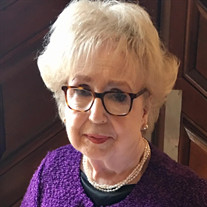 DOROTHY MAYO BLAIR March 9, 1928 – August 24, 2021 Dorothy Mayo Blair, 93 years old, of Jackson, Mississippi, passed away August 24, 2021. She was born in Cincinnati, Ohio, March 9, 1928. At four years old, Dorothy moved to Oklahoma, where she grew up with her grandparents and mother in the towns of Rush Springs, Chickasha, and then Oklahoma City. She graduated from Central High School in Oklahoma City in 1946, earning the First Distributive Education Award. She was proud to have graduated with returning veterans who had enlisted very young and served in World War II. While in high school, Dorothy worked in the record shop of Montgomery Ward where her deep and abiding love for music began. She knew every artist’s voice from the first few notes of a song. Her greatest music love of all time was Frank Sinatra. To her, there was no one else who could compare to him. Following high school, Dorothy worked at the Oklahoma City Chamber of Commerce. There, she developed her life-long gift of making people feel welcome and important. The stories she told of her years at the Chamber and the relationships she built there include many brushes with fame with such people as Gene Autry, Joel McRae, Jack Lemmon, William Powell, Elizabeth Taylor, Jimmy Stewart, and at the time, Senator John F. Kennedy. Dorothy married Sam Moore, with whom she adopted her beloved son, Wes. After divorcing Sam, she later met her husband of 58 years, Howard Blair, on a blind date. They married twenty days later. Howard’s career moved them from Oklahoma City to St. Louis, Missouri and to Overland Park, Kansas, where they had wonderful friends and loved watching Wes begin his incredible baseball career. Their next move was to Cincinnati, Ohio where their daughter, Traci, was born. In 1972, they moved to Jackson, Mississippi where Dorothy lived for forty-seven years. Dorothy immersed herself into supporting her children and grandchildren. No one cheered louder when Wes pitched his no hitters at Western Hills High School baseball games (even when pregnant) than Dorothy. She was overjoyed when he signed as a first round draft choice by the Los Angeles Dodgers. She always said if he hadn’t stopped playing, he would have made their Hall of Fame. Dorothy drove for every field trip Traci had at St. Andrew’s. Dorothy was jokingly well known for having a poor sense of direction, so Traci’s friends lined up to ride with her in order to get back to school a little later than everyone else. She loved serving as room mom three times and getting to know all of Traci’s classmates, whom she dearly loved. As “Grammie”, she found a new pride and happiness she’d never known. Heather’s favorite memories of her Grammie include always decorating her house for Christmas, singing songs, doing crafts together and getting American History lessons. Chris’ fondest memories include Friday movie nights at Grammie’s house starting a very young age where he first developed his love for movies which blossomed into the film making career he has now. He’d bring his screenplays over for Grammie to read first, and she always supported his creative passion. She and Carter would tell each other stories, written ones and ones they’d spontaneously create. Carter dedicated his eighth-grade speech to her, calling his Grammie the most influential person in his life. Grammie and Andrew played cards for hours, mainly Gin Rummy and Go Fish. She’d always let Andrew win. The common thread in all these relationships with her children and grandchildren was love without judgement and always being present. She thought of them first always before she thought of herself. She told each of them every time she’d see them that she believed in them, and no matter what they wanted to do, she knew they could do anything their mind was set upon. Dorothy was a member of Covenant Presbyterian Church for forty-six years. In the early 1980’s, she began leading Covenant’s ministry at Lakeland Nursing Home where she served every Friday for 35 years. She developed the hymn books, organized the volunteers who led devotionals and played piano, and many times brought her children and grandchildren with her and introduced them to all the residents. She also fed meals to the homeless with members of Covenant at the Stewpot where she always made sure the children who came for a meal left with extra cookies in their pocket. In the last decade or so of her life, she became a Worship Service Greeter. She stood at the front door of Covenant every Sunday morning, greeting members and guests by welcoming them, sharing hugs and handing out programs. Service to others was her God given gift that she continued until the end of her life. Dorothy was predeceased by her son, Samuel Wesley Moore, Jr., husband, Howard V. Blair, mother, Gladys Beatrice Jones Mayo, grandparents, Lucian Walter Jones and Maude Jeffe Jones, and beloved aunts, uncles, cousins and friends. She leaves her daughter, Traci Blair Strickland (Mark), daughter in law, Lisa Jarvis Moore, grandchildren, Heather Moore Verret (Matthew), Christopher Wesley Moore, Carter Blair Strickland and Andrew Davis Strickland, and great grandchildren, Hunter Wesley Verret and Isabella Grace Verret, who all remember every story and will lovingly keep her memory alive. Dorothy’s family will receive visitors Thursday, September 2 at Covenant Presbyterian Church in Jackson. Mississippi from 10:00 – 11:00 a.m. A memorial service honoring Dorothy’s life will follow at 11:00 a.m. The family asks that donations in Dorothy’s memory be sent to Covenant Presbyterian Church at https://www.shelbygiving.com/App/Giving/covpc or made payable to the “Junior League of Memphis Centennial Fund” to support their mission of developing the leadership potential of women. Memorials can be sent to Junior League of Memphis, 3475 Central Avenue, Memphis, TN 38111.

The family of Dorothy Mayo Blair created this Life Tributes page to make it easy to share your memories.

Send flowers to the Blair family.