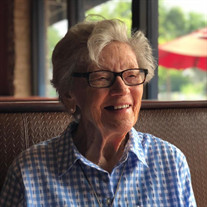 Edith Montedonico Fox, age 92, died peacefully in her sleep in the early morning hours of Wednesday, December 2, 2020. Mrs. Fox is survived by her eight children: Catherine Louise Fox, Herbert John Fox, Jr., James Bennett Fox, Kevin Patrick Fox, Timothy Joseph Fox, William Emmett Fox, IV, Judith Ann Fox and Edith Mae Fox. She was preceded in death by her loving husband of 68 years, Herbert John Fox, Sr. and her daughter Mary Dorsey Fox. She also leaves behind 16 grandchildren, 15 great grandchildren and one great great grandchild. Edith, a lifelong Memphian, was the daughter of Louis Augustus Montedonico and Edna Miltimore Montedonico. She is survived by her sisters Margaret Montedonico “Margie” Brennan and Ida Montedonico “Bit” Ritten and is preceded in death by her sisters Mary Ann Montedonico Stukenborg and Edna Montedonico “Po Po” Beasley. Known as “Big Mama”, she had a deep love for the beach, especially the Emerald Coast in Santa Rosa Beach, FL where she and John lived for many years, welcoming many eager visitors. The fond, sun-drenched memories at “Big Mama’s Beach” will be cherished forever by the Fox Family. The immense amount of love she had for her large family, her quick wittedness, and her unwavering faith were the foundations of her nature. And let us not forget that occasional glass of scotch, because she certainly wouldn’t. A prolific artist, she attended St. Agnes Academy and the Memphis Art Academy, creating a large body of work over her lifetime. Her naturally creative eye, and a great interest in the beauty of simplicity was evident in the striking palette of rich colors she used in her art, which focused on Edward Hopper-esque beach scapes, and candid portraits of family and friends. She also created the original cover for At The River I Stand, the seminal book on the 1968 Sanitation Workers’ Strike in Memphis, TN. A private Funeral Mass will be 9:30 a.m. Friday, December 4 at St. Patrick Catholic Church, 277 South Fourth St., Memphis, TN 38126. Burial will follow in a family plot at Calvary Cemetery, Memphis, TN. In lieu of flowers, the family asks for donations made to St. Patrick’s Church

The family of Edith Montedonico Fox created this Life Tributes page to make it easy to share your memories.

Edith Montedonico Fox, age 92, died peacefully in her sleep in...

Send flowers to the Fox family.