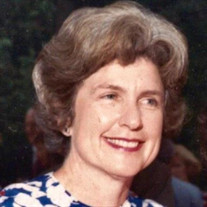 Elissa Austin Todd passed away at her home on February 5, 2021 at 86 years of age. A 5th generation Memphian, she was the daughter of the late Elizabeth and Albert M. Austin, Jr. Elissa is survived by her beloved husband, George Carroll Todd, Sr., and four children, Elisabeth Todd Glassell (John), Amie Todd Sims (Walker), George Carroll Todd, Jr. (Tina), all of Memphis, and Cecelia Todd (Edie Ervin), of Little Rock, AR. She also leaves twelve grandchildren, Amelia Sims, Walker Sims, Elissa Grace Todd, Eliza Sims, Austin Todd, Stuart Glassell, Ashton Glassell, George Glassell, George Carroll Todd III, Louis Todd, as well as Charles Sims (Brandi) and Mari Michael Glassell Allen (Asa). In addition to her parents, her two brothers, Albert M. Austin, IV and Richard Austin predeceased Elissa. Elissa met her husband, Carroll at a Lil’ Abner & Daisy May Dance at the Peabody Hotel in 1953. For Carroll, it was love at first sight. After first leaving him on the dance floor, Elissa reconsidered and quickly fell in love. They were married 66 years and were blessed to watch their children grow up and to grow old together in the house that Carroll built next door to Elissa’s mother. Elissa’s playful love of entertaining and vivid imagination made her an excellent teller of fairy tales, ghost stories, and family histories to her children and their friends as they were growing up. Elissa had a jovial but competitive spirit; she hated losing at the Bridge table almost as much as she despised communism. Few could rival her intellectual sharpness. There was not a book on the many shelves in her extensive library she had not read. Elissa was as comfortable discussing Shakespeare, history and current events, as she was talking about horticulture, tennis or her children. After graduating from the Hutchison School in Memphis, Elissa attended Bennett College of Millbrook, New York, as well as Sophie-Newcomb (Tulane) College in New Orleans. She was an active member of the Women’s Club, The National Society of The Colonial Dames of Tennessee, the Antiquarians, the Tuesday Study Club and the Memphis Garden Club, where she won the Garden Club Award for Conservation. One of her most cherished volunteer efforts was teaching Braille to blind children through the Memphis Junior League. She loved reading the Psalms and attended St. John’s Episcopal Church. Elissa had a knack for making the person in her company feel as if he or she were her favorite person in the world. Few who have met her could forget her deep laugh, and that mischievous twinkle in her eye that made you feel as though you were in on something with her. Elissa took great pleasure of watching her ten grandchildren grow up in Memphis and spend summers with her and Carroll in Harbor Springs, Michigan. Later in life, one of her favorite things to do was visit Elmwood Cemetery, where her parents and so many generations of her family are buried and where Elissa will be laid to rest. Services will be held at St. John’s Episcopal Church on Wednesday, February 10, with burial to follow at Elmwood Cemetery. Due to Covid, there will no visitation, and service and burial will be private. Friends are invited to view services on the St. John Episcopal Church of Memphis website links. https://www.stjohnsmemphis.org/services/ https://www.facebook.com/StJohnsMemphis (livestream) The family requests that memorial gifts be sent to the Elmwood Cemetery (824 S. Dudley, Memphis, TN 38104) or Dixon Gallery and Gardens (4339 Park Ave., Memphis, TN 38117).

Elissa Austin Todd passed away at her home on February 5, 2021 at 86 years of age. A 5th generation Memphian, she was the daughter of the late Elizabeth and Albert M. Austin, Jr. Elissa is survived by her beloved husband, George Carroll Todd,... View Obituary & Service Information

The family of Elissa Austin Todd created this Life Tributes page to make it easy to share your memories.

Send flowers to the Todd family.