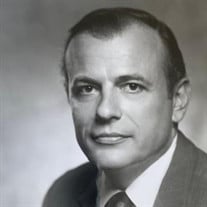 Emil William Henry, Former FCC Chairman and Lifelong Son of Memphis, dies at 92. Prominent attorney and advocate for education and equal rights during the most formative era of American television broadcasting, Emil William Henry was born and raised in Memphis, Tennessee, the son of Dr. John Philips Henry, the city’s only allergist, and Elizabeth Tschudy Henry. After his early schooling, Mr. Henry graduated cum laude from the Hill School and then Yale University, where he honed his love of history and acapella song. Following three years as an officer in the U.S. Navy during the Korean campaign, he attended Vanderbilt Law School, where he edited the Law Review and joined the Order of the Coif. In 1955, he married Sherrye Eileen Patton, daughter of Clyde Lee and Effie Metcalf Patton, both outstanding Memphis citizens; and became father to Elizabeth, Sherrye Jr., and Emil Jr. whilst beginning his law career and receiving his first call to public service. For five years, Mr. Henry practiced with Memphis law firm Chandler Manire & Chandler and became active in the escalating civil rights movement, urging the admission of Black attorneys to the city and county Bar Associations while mediating federal enforcement of local anti-discrimination laws. In 1960, he took a three-month leave of absence to volunteer for John F. Kennedy’s presidential campaign, his primary focus to secure voting rights for all citizens of the South, a courageous stance to take during such tumultuous times. Two years later, President Kennedy appointed him to the Federal Communications Commission and in mid-1963 named him Chairman, making him at age 34 the youngest person in U.S. history to lead a major regulatory agency of the federal government. During his three-year tenure at the FCC, Mr. Henry became known as a vigorous but fair regulator of telecommunications industries, in particular the emerging satellite and cable systems. Recognizing the broad and powerful reach of broadcasting to shape public opinion, he became a major force to clarify and enforce the FCC’s Fairness Doctrine, which required all licensed television and radio stations to allow equal airtime to the presentation of controversial views. He also championed the cause of educational TV, actively promoting the nation’s first public television and radio networks, eventually overseeing the creation of at least 90 ETVs under recent Federal funding legislation. In a memorable speech to the National Association of Broadcasters in March 1966, Chairman Henry also took on the clash of artistic integrity and commercial censorship. “Too often, I suggest… you surrender to pop-gun complaints as if they were the crack of doom,” he said: “Too often, the record here not only shows a lack of courage but a lack of common sense… No one suggests that your lives will be any less complicated if you stop playing it quite as safe as you have in the past. Any new departure in this contentious area will raise eyebrows and embroil you in controversy. But more courage here will make your jobs more satisfying—and American broadcasting will be the better for it.” Following government service, Mr. Henry moved to New York City, where he became CEO of a closed-circuit television company, one of the first carriers to broadcast Muhammad Ali’s boxing victories, among other sporting events. In 1972, he returned to Washington, D.C. to join Ginsburg Feldman & Bress as a senior member of its communications group and eventually the firm’s managing partner. During this time, he served as Chairman of the Board for the U.S. Advanced Television Standards Committee (until 1986) and sat for 14 years on the Board of Trustees (four years as Chair) of WETA-TV-FM, the flagship public radio station for the nation’s Capital. For a decade he served as trustee of PBS. Throughout his years in Washington, he was a fixture in The Rappahanock Hunt, where clad in his red jacket he rode atop his prized horse Camelot. In 1994, Mr. Henry retired from the law practice and returned to Memphis as CEO of the Rising Tide Foundation, a charitable organization which enabled the formation and growth of local minority-owned businesses. He became an active member of Calvary Episcopal Church, serving as Senior Warden on the Vestry; he worked as an intake counselor at Calvary Street Ministry and the Hospitality Hub, where he was a Board member and eventually Chair. At the age of 71, Mr. Henry—always a man of letters and lover of the language arts—wrote two works of historical non-fiction, publishing Triumph & Tragedy: The Life of Edward Whymper (2011), about the first man to scale the peak of the Matterhorn, and Fatal Alliance: The Prosecution, Imprisonment and Gangland Murder of Jimmy Hoffa (2012), about the trial of the notorious labor union boss that took place in Nashville, TN. In addition to his many accomplishments, his widespread travels and professional triumphs, his greatest personal joy came from lifelong relationships with friends and above all, family—his most esteemed title that of “GrandBill” to his grandchildren: Madeleine and son-in-law Dave Alexandre, Parker Henry, and Emil Henry III; Nora Garrett and Taylor Garrett as well as daughter-in-law Sarah Garrett and his great-grandchildren, Miles and Elmer Garrett. Perhaps his only regret came from not having voice to join the Whiffenpoofs, the storied acapella chorus at Yale; his greatest pride that his son Emil did, securing him honorary membership later in life. An elegant, gracious man, author and adventurer and raconteur, advocate for the underserved and counselor to anyone who came seeking his kind, judicious advice, Emil William Henry leaves a legacy of service to his community and a life informed by the twin principles of courage and common sense. “But more courage,” he might say: and we’ll all be the better for it. In remembrance, please send donations to Calvary Episcopal Church, 102 N. Second Street, Memphis, TN 38103.

The family of Emil William Henry created this Life Tributes page to make it easy to share your memories.

Send flowers to the Henry family.