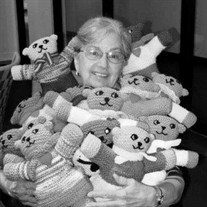 Emilie Lois Goldberger Ratner, February 4, 1933 – January 6, 2021 Emilie Lois Goldberger Ratner, 87, died in her home on January 6 after a brief illness. Emilie was a graduate of Central High School, and a life-long resident of Memphis. She attended Brandeis University in Waltham, MA, and returned to Memphis and graduated from Memphis State University. Emilie was very active in the Civil Rights Movement in Memphis. Her former husband, the late Marvin L. Ratner, credited her as being his motivating force behind his establishing the first integrated law firm in the South, along with his partners, the late Honorable Russell Sugarmon and others. Emilie worked for the Girl Scout Council, where she wrote a grant that made it possible for the Tenn-Ark-Miss Council to be integrated, allowing thousands of Black girls to join the Girl Scouts for the first time. As a result of her involvement in a national literary group, Great Books, Emilie was invited to teach an adult education class on Women’s Literature at Southwestern College (now Rhodes College.) Emilie was Treasurer of the Wolf River Society, a unique, integrated social club in the 1960s. Emilie worked as an accountant for President Johnson’s War on Poverty, MIFA, and The Alliance for the Blind, Temple Israel, and has participated in many volunteer activities including driving for God’s Unfinished Business and Mitzvah Day at Temple Israel, and her most recent activity, knitting over 2,000 bears for the Temple Sisterhood’s Mother Bear Project for children in Africa affected by HIV. Emilie is survived by her long-term partner, Harold Katz, and three children, Carl Ratner (Maxim Lukinsky) Kalamazoo, MI, Susan Ratner (Claire Ryan) of Memphis, Yvette Ratner (Robin Jaffe) of Auburn, AL, as well as two grandchildren, Madeleine Ryan and Monique Ryan, and five great-grandchildren, and a large extended family. A private graveside service will be held, with a memorial service to be held at a later date. In lieu of flowers, donations can be made to Hope House Day Care in Memphis, TN, Planned Parenthood, or Temple Israel.

The family of Emilie Goldberger Ratner created this Life Tributes page to make it easy to share your memories.

Send flowers to the Ratner family.