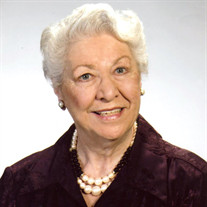 Florence H. Leffler died April 6, 2020. Born on September 2, 1925, she was 94. Mrs. Leffler was the widow of Judge William B. Leffler, whom she married in 1950. She was born in Birmingham, Alabama. In 1942 she moved with her parents, Frank and Armine Horton, to Memphis. Florence liked to think of her life as a long running play, filled with a little drama and many comedy and love scenes. Act One began after graduation from Northwestern University. She returned to Memphis and began a long career in education, teaching Speech at Whitehaven High School and 12th Grade English at Frayser High School where she eventually became a guidance counselor and assistant principal. In subsequent years, she taught 12th grade English at Frayser High School. She left Frayser to become the principal at Macon Elementary School, White Station Junior High School and finished her education career as principal of Central High School. Act Two began after retiring form the Memphis City Schools. After her retirement, she began Act Two of her “play”. With the enthusiastic support of her husband, she moved to New York City for one year and began to pursue her life-long dream of being a professional actress. Acting was not new to her. She first performed at Theatre Memphis playing the title role in “Antigone”, for which she was named best actress of the season. She followed that with over 50 years in such roles as: Daisy in “Driving Miss Daisy”, Esther in “On Golden Pond”, Rosemary in “Picnic”, Truvie in “Steel Magnolias”, and Eleanor in “Lion in Winter”. While in New York City she studied with Jose Ferrar and Otto Preminger, performed in Off-Off Broadway plays, staged readings and appeared in television commercials. Act Three began when she became a full-time housewife. She and Judge Leffler traveled the world. Perhaps their most fascinating trip took them to China. It was in many ways unique because they were in a group who were only the second to be admitted into China. Other wonderful experiences came while on the Orient Express, the Q.E.2 and cruising the Greek Isles. Their longest trip took them to Australia and New Zealand. In 1987, following Judge Leffler’s death, Act Four became her career in politics. She served two terms on the Memphis City Council. She declined to run for a third term saying that she believed fervently in term limits for all elected representatives. She found politics fascinating and exhilarating, and thoroughly enjoyed the associations with the people she met. Although it was at time frustrating, she always treasured the people and events that she encountered during those eight years. Mrs. Leffler had four great passions in her life: Her God, her family, her country and the Arts. She was a long-time member of Second Presbyterian Church where she served over the years as a Sunday School teacher, a deacon, an officer of the Senior Adult Ministry 3M and president of the Chapel Sunday School Class. She served several years on the Advisory Board of the Salvation Army and served two terms as president of the Auxiliary. She had a particular interest in encouraging the men at the Adult Rehabilitation Center and found great joy in leading a Bible study for the women at the Purdue Center of Hope. She served on the State Board of Education, the Memphis and Shelby County Land Use Control Board, and the boards of the Liberty Bowl, the Mid-South Fair, the Memphis Orchestral Society and Opera Memphis. She was the first woman to be elected as president of the Memphis Kiwanis Club. Over the years Mrs. Leffler was honored as: Outstanding Woman of the Year in the Arts, Best Actress of the Year in the CA readers’ poll, Outstanding Senior of the Year by the Kiwanis Club, granted the Hebe Award by the Memphis Symphony for outstanding service to the arts, the Hugo Dixon Award by the English Speaking Union for service to the community and the Sallie Award by the Salvation Army for service to the Salvation Army. The final curtain fell on the long-running play that was her life on April 6, 2020. Florence was preceded in death by her grandson, William Leffler. She is survived by her son, Steve Leffler (Lisa), her daughter, Elise Frick (Mike), her grandson, Robert Leffler (Mallory) and nephews Ray Leffler (Miriam) and George Leffler. There will be a memorial service at a later date. The family suggests contributions may be made to the William B. Leffler Scholarship Fund at the University of Memphis Law School, the Salvation Army, Theatre Memphis or the Memphis Symphony.

The family of Florence Horton Leffler created this Life Tributes page to make it easy to share your memories.

Send flowers to the Leffler family.