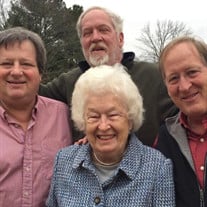 Frances Ruth Alford McDonald, 97, passed away July 13 at Allen Morgan Health Center. She was born to Dr. William Grady Alford and Theo Green Alford on March 14, 1923, in Memphis. In 1941, Frances was voted Most Popular by her Central High senior classmates. Her outgoing, cheerful nature endured throughout her life. Frances attended Southwestern College at Memphis (Rhodes), then transferred to The University of Colorado. In 1945, when Crawford McDonald finished his duty as an Air Force bomber pilot in the South Pacific, he traveled directly to Colorado and asked for Frances's hand in marriage.They married in 1947, then eventually settled back in Memphis. There they raised three sons, who survive her: Crawford McDonald Jr. (Linda); Webster McDonald (Cynthia); and William Grady McDonald (Elizabeth); grandchildren: Webster McDonald Jr., Gwynne McDonald, Leigh McDonald, Melissa McDonald, Grady Goodwin McDonald, and two great grandchildren. She is also survived by her sister, Ann Gail Alford Camp (Frank), as well as nieces, nephews, and cousins she held dear. Frances enjoyed being involved in the activities and celebrations of her family and friends, who all benefited from her attention and support. She was active in Grandview Garden Club, Memphi, Le Bonheur Club, and in her later years was an enthusiastic participant in activities offered at Trezevant Manor, where she resided for the past 8 years. At Trezevant Frances received a recent Activity Participation Reward, and her active retirement pace is a testament to the care and thoughtful planning provided by Trezevant staff. Frances treasured her many friends at Trezevant. Memorial gifts may be made to Church Health Center, Second Presbyterian Church or to the charity of the donor's choice. A small family service will be held this week at Forest Hill Cemetery. Due to Covid19 precautions a memorial service will occur at a later date.

Frances Ruth Alford McDonald, 97, passed away July 13 at Allen Morgan Health Center. She was born to Dr. William Grady Alford and Theo Green Alford on March 14, 1923, in Memphis. In 1941, Frances was voted Most Popular by her Central High senior... View Obituary & Service Information

The family of Frances Alford McDonald created this Life Tributes page to make it easy to share your memories.

Send flowers to the McDonald family.