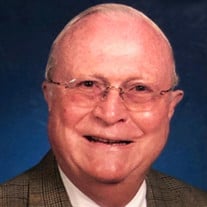 Francis Osborne Schaefer, Jr. May 17, 1932 - November 16, 2020. Billy, Charlie and Wesley Oates couldn’t know the nice man who moved in next door on Central Cove in the 1960s would so profoundly affect their lives. His genteel demeanor, kindness and humor created a perpetual bond, sealed first as Godfather to Wesley, then as Stepdad to the boys— their mother Gail grew into the love of his life, and his bachelor days came to an end when he was 50, in a fairy tale romance that would last, in this life, for 34 years. Surrounded by loving family, Francis Osborne Schaefer, Jr., “Obby/Ozzie” as he is known by many, slipped away peacefully to join Gail on November 16, 2020, after a valiant struggle against pneumonia, following a battle he had been winning— with cancer. Obby came into this world on May 17, 1932 in Jacksonville, Florida to Francis Osborne and Martha Emily Wood Schaefer. In Memphis he attended Vollintine Elementary, Snowden and Central High Schools, and was graduated in 1955 from Washington and Lee University with a Bachelor of Science and minor in Business Administration. Entering the United States Army Transportation Corp shortly thereafter, he was stationed in France, and discharged honorably in 1957 with the rank of First Lieutenant. Upon his return to Memphis, he joined Central Woodwork Inc., the business begun by his father, working alongside brothers Dudley Pledger (Dudley) and William Wood (Billy) Schaefer, and served as Chairman and President until he retired in 1987. Ozzie also served on the board of The National Sash and Door Jobbers Association from 1964-66 and 1971-73. Retirement allowed greater indulgence in his passions for duck hunting and trout fishing, cooking, and travel. Ozzie and Gail settled for many years near Heber Springs, in a home he built overlooking the Little Red River, a perfect retreat for hosting family and friends, creating memories for lifetimes. The Schaefers were active members of Calvary Episcopal Church. Ozzie became a lay eucharistic minister in the chapel at Trezevant Manor. He was a member of the Rotary and Phoenix Clubs of Memphis, The University Club of Memphis and The Red Apple Inn and Country Club of Heber Springs, Arkansas. In 2003 they returned to Memphis. The legendary garden he created behind their home in East Memphis mirrors his ability to grow relationships with others. This was Ozzie Schaefer’s true legacy, his example: be an endearing, selfless, generous person with a kind heart and hearty laugh, and you will know no strangers. Beloved Obby, we encircle you— forever in our hearts. Stepsons and families: William Lucian III and Mitzi Oates, of Nashville (Amanda, Sarah Lane and Taylor) Charles Paxton III and Suzanne Oates (John and Jerry) John Wesley and Courtney Oates of Charlotte, NC (David, Sam, Charlie, Denton and Molly) Brothers and families: Dudley Pledger and Joan Schaefer (Dudley Jr., Scott, Paul and David) William Wood and Margaret Schaefer (Mark, Pat and Lee) Nephews and families: Dudley Pledger, Jr. and Lynn Schaefer (Michael, Caroline and Matthew) Scott Winter and Susan Schaefer (Thomas and Carrie) Paul Osborne and Laura Schaefer (Virginia) David Benson and Kristin Schaefer (Ashley, Molly, Heather and Katie) William Mark and Heather Schaefer of Nashville (Ellie, Claire and Ava) Patrick Eugene and Mary Lee Schaefer (Emmy and Sarah) Lee Wood and Ann Schaefer of Nashville (Gigi) Jesu, give the weary Calm and sweet repose; With thy tenderest blessing May our eyelids close. From the Child’s Evening Hymn by Sabine Baring-Bould (1834), found in Ozzie’s papers. A family graveside service will be held at a future date. The family requests that memorials honor Ozzie’s favorite organizations: The Church Health Center, Dixon Gallery and Gardens and Memphis Botanic Garden.

Francis Osborne Schaefer, Jr. May 17, 1932 - November 16, 2020. Billy, Charlie and Wesley Oates couldn&#8217;t know the nice man who moved in next door on Central Cove in the 1960s would so profoundly affect their lives. His genteel demeanor,... View Obituary & Service Information

The family of Francis Osborne Schaefer Jr. created this Life Tributes page to make it easy to share your memories.

Send flowers to the Schaefer family.