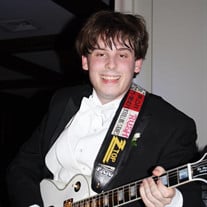 Fred Sidney Smith III, 29, passed away at home in Memphis, TN on October 17, 2021. He was born on August 26, 1992, in Memphis, to beloved parents, Mr. and Mrs. Fred Sidney Smith, Jr. Fred attended St. Benedict at Auburndale and later Christian Brothers University where he received an Undergraduate Degree in Mechanical Engineering and a Master’s Degree in Teaching. He devoted his work to his students at Germantown High School, where he taught in the Mathematics Department. He cared deeply for their success both inside and outside of the classroom. In addition to his career as a teacher, he also volunteered his time at PURE Youth Athletic Alliance, investing in their students. A born musician, Fred loved to play the guitar from a early age and enjoyed sharing his gift by playing with and performing for others. While electric guitar was his true love, he was also adept at keyboard, percussion, and nearly any instrument put in front of him. His interests also included playing games, singing karaoke, traveling, football, and basketball. Fred was as gentle as he was kind. His words were intentional and sincere. He extended the utmost respect to each person he met and truly saw the best in everyone. He cherished his role of uncle to his niece and nephew. He loved and was loved dearly by his family and friends. In addition to his parents, he is survived by his sister, Kate Mallory (Neely); nephew, Neely Mallory; niece, Annie Mallory; and grandmother, Irene Orgill. Fred also leaves many aunts, uncles, cousins, and friends. Visitation will be at 10:00am Tuesday, October 26th in the Parish Hall at St. John’s Episcopal Church with service to follow at 11:30am. In lieu of flowers, the family requests that memorials be made to PURE Youth Athletic Alliance (4847 Amey Rd., Memphis, TN 38109), Church Health (1350 Concourse Avenue #142, Memphis, TN 38104), or the charity of choice.

The family of Fred Sidney Smith III created this Life Tributes page to make it easy to share your memories.

Send flowers to the Smith family.