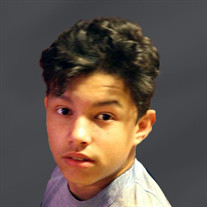 Gabriel Charles Krog Beloved son, grandson, brother, nephew, and friend. Life has changed, not ended, for Gabriel Charles Krog (16) on April 6, 2020. Under the loving care of the PICU team at Phoenix Children's Hospital in Phoenix, Arizona, Gabriel passed away unexpectedly from complications with a Brain Arteriovenous Malformation (AVM). Gabriel was born on January 3, 2004 in Clarksville, TN to Michael and Ruth Krog. Gabriel is survived by his father, Michael Krog (Sia), his brother, Ian of Lake Havasu City, AZ and his sister, Luckie Krog of Scottsdale, AZ, his mother, Ruth Kinyanjui (James) of Dallas ,TX, his grandparents, Ario Mu of Lake Havasu City, AZ, Susan Smith of Dallas, Texas, and Rita Claire Krog of Memphis, TN, as well as numerous aunts, uncles and cousins, who will all miss him dearly. He is predeceased by his grandparents Joseph Mu, Tom Smith, and Gregory Krog, Sr. He is the youngest of three children: Luckie Krog (24), and Ian Krog (20). His earlier years were spent primarily in Memphis, TN where he attended Holy Rosary Catholic School. He was a rambunctious little boy who loved playing video games, football, and basketball. He always had a ready smile and made many friends. Mellowing into his teenage years, under the care of his father and step-mother (Sia), Gabriel found another home in Arizona, where his passion for Youtubing was unleashed. He spent hours with his older brother, Ian, and their dog, Hobo, scouring the woods of Cottonwood, AZ for the perfect “shoot.” Did they find the ideal shoot? It’s unknown. What is known is, the last 9 months of his life, he found a greater appreciation for his faith, his family, and life in general. Recently, in conversation with his cousins about the sudden death of Kobe Bryant and the need to be prepared for Heaven, Gabriel commented, “It’s up to God, but I’m not going that way. God has a plan for me. I have work to do.” Little did he know that God’s plan came to be, and his work has begun. So, Gabriel, in between enjoying celestial caramel frappes with chocolate drizzle, send us those “perfect shots.” Gabriel will be laid to rest at Calvary Catholic Cemetery in Memphis TN, on Wednesday, April 15, 2020. The family asks that donations be made to the Ronald McDonald House in lieu of flowers.

The family of Gabriel C. Krog created this Life Tributes page to make it easy to share your memories.

Send flowers to the Krog family.