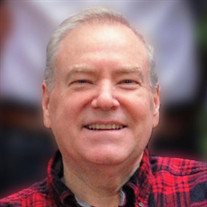 George Joseph Kuehl, husband of Diane Mascari Kuehl, passed away on October 24. He was born on May 4, 1957 to George Justin Kuehl and Eileen Kuehl (née Martens) in St. Louis, MO. A product of Catholic education, including Memphis Catholic High School and Christian Brothers University, George lived out the lessons of faith, family, and friendship for the rest of his life. In his vocation as husband and father, George worked hard. Whether selling business forms and baking cakes by day or throwing boxes at the FedEx hub or newspapers for the Commercial Appeal by night, he gave everything to serve others. His joy was the satisfaction of his customers. He reveled in his second career as a baker because he just loved making people smile. In recent years, as he carried debilitating physical pain, George became even more determined to share his gifts--baking bread for neighbors and the homeless, taking time to chat with the grocer or the letter carrier, or slipping the neighborhood kids a few bucks to pull weeds. Although never a youth member himself, Boy Scouts of America would indelibly shape and be shaped by George. For over 20 years, he would guide countless boys on their path to Eagle Scout at Troop 274 at Holy Rosary Catholic Church, where the scout room is named in his honor. At the district and council levels, he multiplied his impact by training scores of adult volunteers, a service for which he was granted numerous awards. Even so, his proudest scouting achievements were sitting on the summit of the Tooth of Time at Philmont Scout Ranch, and seeing his three sons attain the Eagle Scout Rank. George’s life motto was “Have fun and learn something,” a refrain of his own invention that became a dependable exhortation to his children. He lived this in his own way through his fascination with Lionel toy trains, classic films, Hawaiian shirts and Panama hats (to match his musical tastes), and telling stories to anyone who would listen. At his core, George was a man of faith, tirelessly dedicated to God and his family. Without fail he could be found every Sunday in the same pew at St. Francis of Assisi Catholic Church with his family by his side. He loved his wife and kids more than anything and was one proud dad. However, nothing compares with the joy of his newfound vocation as Granddad to his cherished granddaughter, whom he showered with love. He was predeceased by his mother, Eileen Kuehl. He is survived by: his wife of 41 years Diane Mascari Kuehl; his children Justin (Dawn), Stephen, Kevin, and Katie; his father, George Justin Kuehl, and his siblings Mary (Sam), Charles (Elizabeth), Michael, Gregory (Stefanie), and Kathleen (Gary). He is also survived by his granddaughter Emmeline and many nieces and nephews. Visitation will be held on Thursday, October 28 from 5:00 to 7:00 PM at St. Francis of Assisi Catholic Church in Cordova. Mass will be celebrated on Friday, October 29 at 1:30 PM also at St. Francis with burial at Memorial Park Cemetery to follow. Social distancing and masks are required. See canalefuneraldirectors.com for livestreaming information. In lieu of flowers, donations can be made to Boy Scout Troop 274, Holy Rosary Catholic Church, 4851 Park Ave., Memphis, TN 38117.

George Joseph Kuehl, husband of Diane Mascari Kuehl, passed away on October 24. He was born on May 4, 1957 to George Justin Kuehl and Eileen Kuehl (née Martens) in St. Louis, MO. A product of Catholic education, including Memphis Catholic High... View Obituary & Service Information

The family of George Joseph Kuehl created this Life Tributes page to make it easy to share your memories.

Send flowers to the Kuehl family.