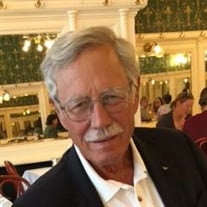 Husband, father and artist Gerald “Jere” Williamson passed away on Tuesday, December 2, 2020, at the age of 78. Jere was born September 4, 1942 to Jere and Lillian (Covington) Williamson in Brownsville, Tennessee. As an undergraduate, Jere was a member of Sigma Alpha Epsilon at Memphis State University. He earned his MFA in painting from Florida State University. Jere lived and worked as a professional artist for many years in coastal Florida, where he spent his days painting, surfing, and teaching art. He was represented by galleries in New York, Georgia, and Florida, and his art is included in the permanent collections of museums and galleries nationwide. In his thirties, Jere returned to Brownsville to begin his second act as a banker and start his family. On December 3, 1977, he married Peggy Marr Mulherin. They raised three daughters, Molly, Margaret, and Susan. Jere and Peggy, herself a potter, passed their artistic abilities on to all of their children, who have channeled that energy into their respective careers. Jere enjoyed spending time on the golf course with close friends, hunting, and a great meal in New Orleans. Upon retirement, Jere built an art studio at home, and began painting regularly once more. Jere was preceded in death by his father, Jere, his mother, Lillian, and his daughter, Molly. He is survived by his wife, Peggy, and his daughters, Margaret and Susan. The family requests memorials be made to Christ Episcopal Church, 140 N. Washington, Brownsville, TN 38012.

Husband, father and artist Gerald &#8220;Jere&#8221; Williamson passed away on Tuesday, December 2, 2020, at the age of 78. Jere was born September 4, 1942 to Jere and Lillian (Covington) Williamson in Brownsville, Tennessee. As an undergraduate,... View Obituary & Service Information

The family of Gerald "Jere" Edward Williamson Jr. created this Life Tributes page to make it easy to share your memories.

Send flowers to the Williamson family.