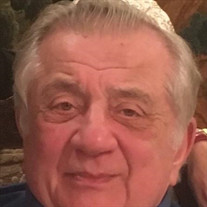 Gerald L. “Jerry” Ballin passed away peacefully on January 31, 2021, at his home surrounded by his devoted family and dear little dog, Bambi. Jerry leaves his wife of 50 years, Nancy Bloom Ballin; his son, Dr. Jeffrey D. Ballin of Baltimore, Maryland; his daughter, Patricia Ballin Kiersky and son-in-law Elliot Kiersky of Germantown; and two grandchildren, Shea Sylvia Kiersky and Amelia Hart Kiersky. Jerry was born February 2, 1936, in Memphis to Benjamin Joseph Ballin and Honcee Kaplan Ballin, immigrants from Belarus (Russia at the time) and Poland. He graduated from Central High School and Memphis State University with a degree in business. Jerry and Nancy were married June 18, 1970, at Baron Hirsch Congregation. Jerry and Nancy were deeply devoted to each other, their children, and their grandchildren, and recently celebrated their golden wedding anniversary. Jerry also deeply cherished his brother, Marvin Ballin, who preceded him in death, and his sister, Ilene Ballin Goldstein. Jerry was a fabulous dancer, born with natural talent, and in his younger years loved to sing. He was so gifted that he was invited to appear on the Ted Mack television show. However, he was drafted into the Air Force, which waylaid his dreams of performing. Following his military service and university studies, he started his own business, Electrical Sales. He later formed a business partnership, Electrical Associates, Inc., a professional endeavor to which he devoted 40 years. In retirement, Jerry was very proud of his position as Warden Emeritus of the Baron Hirsch Cemetery and contributed many hours to its maintenance and improvement. However, he reserved his greatest devotion for his family, laying a solid, loving foundation for them and modeling true fatherly love. In the later years of his life Jerry had a wonderful caregiver and friend, Alicia Pittman. They treasured each other and had so much fun going to thrift stores, Costco, and checking out the dogs at the shelter. Alicia and Jerry went out to lunch, dinner, and everything in between. Alicia gave her time and friendship generously and was always available to attend to Jerry’s needs and whims. Jerry’s family is also forever grateful to May Wright for the loving care given from her heart in the last year of his life.

The family of Gerald "Jerry" Lee Ballin created this Life Tributes page to make it easy to share your memories.

Send flowers to the Ballin family.