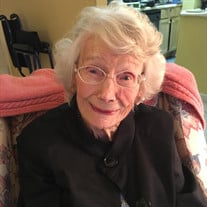 Gladys Jane Caughlin Campbell, 104, died peacefully on Sunday, March 8. Born in New Orleans, LA, on February 19, 1916, “Janey” called Memphis her home for most of her life. She was a graduate of Lausanne School and attended Southwestern at Memphis (now Rhodes College), where she was a member of Chi Omega Fraternity and a Pi Honorary. She was happily married to the late Robert (Bob) Lee Campbell, Jr., for 56 years. Following a Visitation in the Great Hall at 2:00pm, services will be held at 3:00pm on Friday at Calvary Episcopal Church, from where she was married and a lifelong member. She received a Service Cross for her 70 years of dedication to the Calvary Altar Guild from 1930 – 2000, including time as the Directress. She was also a volunteer at the Waffle Shop and member of the St. Margaret’s Guild. She and her husband, Bob, were also founding members of St. Michael and All Angels Episcopal Church in Dallas, TX. Mrs. Campbell belonged to several service organizations, including the Junior League of Memphis, Tuesday Study Club, and Carnival Memphis RaMet, Osiris, and Memphi Societies. In her later years, she enjoyed acting as a member of the Trezevant Manor Quality of Life Care Board, as well as serving as the Director of the Altar Guild of St. Edward’s Chapel. Friends would often ask what her secret was to such longevity, and her answers were always the same: the love of family, finding gratitude in all things, and choosing happiness no matter the circumstances. Those closest to her would also add Cheetos, Hershey bars, and Jack Daniels to that list. She was an inspiration to all who knew her – known for her smile, quick wit, and strength. She leaves a daughter, Jane Campbell Gober (Mackie), a son, Robert Lee Campbell IV (Debbie), four grandchildren – Mackie Howard Gober, Jr. (Carmine), Peria Gober, Katherine Campbell Simmons (Donnie), and Lee Campbell Sandberg (Zach), as well as six great-grandchildren, all of Memphis. The family would like to extend a special thank you to her wonderful team of caregivers, who loved her like their own. Memorials may be sent to Calvary Episcopal Church Altar Guild, the Trezevant Manor Foundation, Grace-St. Luke’s Episcopal Church, or Church of the Holy Communion.

Gladys Jane Caughlin Campbell, 104, died peacefully on Sunday, March 8. Born in New Orleans, LA, on February 19, 1916, &#8220;Janey&#8221; called Memphis her home for most of her life. She was a graduate of Lausanne School and attended Southwestern... View Obituary & Service Information

The family of Gladys Jane Caughlin Campbell created this Life Tributes page to make it easy to share your memories.

Send flowers to the Campbell family.