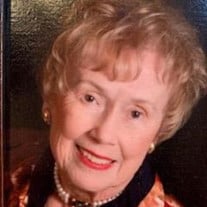 Gloria Polk Nobles, age 83, passed away peacefully on July 4, 2020, at Trezevant Manor. Gloria was born on September 20, 1936, to Helen Clopton Polk and Cadwallader Leonidas Polk in Helena, Arkansas where she spent her formative years. She was preceded in death by her late husband, Dr. Eugene Rodman Nobles, Jr. Gloria graduated as Valedictorian from Helena High School where she was also a baton-twirling majorette and clarinet player in the band. Her senior year she was selected to represent Arkansas at Girls’ Nation in Washington, D.C., and one of her favorite life experiences was meeting President Eisenhower in the Rose Garden. Throughout her life, Gloria exuded boundless energy and enthusiasm in any endeavor she undertook. She graduated from Vanderbilt University magna cum laude and Phi Beta Kappa with a B.A. in Spanish. She was a member Kappa Alpha Theta sorority, Mortar Board, and the Vandy cheerleading squad. Gloria was thrilled to have cheered the Commodores on to victory in the 1955 Gator Bowl. Upon graduation, she moved to Memphis where she taught Spanish before becoming a real estate agent. In 1962, she was the youngest female realtor in the city and the first female to make the Million Dollar Sales Club. During this time Gloria met the love of her life, Gene Nobles. It was a match made in heaven. Gloria had a keen, quick mind and a multitude of interests. She believed in supporting the arts as well as the Memphis community. She and Gene were major patrons of the Memphis Symphony Orchestra. Gloria served as a board member of the Memphis Orchestral Society for 25 years, eventually receiving the distinction of board member emeritus. One of many accomplishments for the symphony was her persevering through city hall and convention center committees to secure placement of a flagpole flying Old Glory and the Memphis Symphony flag outside the new Cannon Center auditorium. Gloria served as Vice President and Membership Chairman for the English Speaking Union and received the Hugo Dixon Founder’s Award for outstanding service. She treasured her work with the Salvation Army where she served as President of the Women’s Auxiliary and was honored with the distinguished Sallie Award in 2010. Gloria was a longtime member of Calvary Episcopal Church where she volunteered for the Altar Guild and Waffle Shop and was President of the Women of the Church. She was a past President of the Arts and Garden Club and a member of the Junior League, Woman’s Exchange, Daughters of the American Revolution, Colonial Dames, and Monteagle Sunday School Assembly where she spent her childhood summers. Gloria’s husband, Gene, had a unique hobby of refurbishing antique cars. Gloria found a passion for selling these cars upon their restoration. Gloria embraced this task and sold 22 cars over their married life. She was a devoted wife, mother, and grandmother and had a knack for making people feel loved and welcome. The epitome of a gracious Southern lady, she believed in showing gratitude on a daily basis to her fellow man. She is survived by her two daughters and their families: Helen Nobles Bird and husband Chris Bird of Memphis and grandchildren Lil, Christopher, and Gloria, and Lilian “Lil” Nobles Rudd and husband Lee Rudd of Memphis and grandsons Forest and Davis. The family would like to give special thanks to Beverly Williams for her lifelong service and friendship as well as to the staff of Trezevant Manor. Any memorials may be sent to Calvary Episcopal Church, the Memphis Symphony, or the Salvation Army. A private burial will be held on Tuesday, July 7. Following the service, the family will receive friends at a covid-appropriate, socially distant reception at the University Club of Memphis, 1346 Central Ave. from 5 to 7 pm. Please wear a mask.

Gloria Polk Nobles, age 83, passed away peacefully on July 4, 2020, at Trezevant Manor. Gloria was born on September 20, 1936, to Helen Clopton Polk and Cadwallader Leonidas Polk in Helena, Arkansas where she spent her formative years. She was... View Obituary & Service Information

The family of Gloria Polk Nobles created this Life Tributes page to make it easy to share your memories.

Send flowers to the Nobles family.