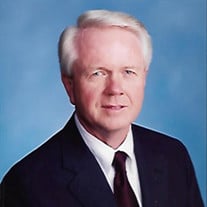 Harold Lance Forsdick, Sr., 81, of Memphis, TN, passed from this life to the next on June 18, 2021. Lance was born August 28, 1939, in Memphis. He attended Immaculate Conception grade school, Christian Brothers High School, and Christian Brothers College (now University). Lance was well known and well-loved in the Catholic Diocese of Memphis. He served on countless boards, including St. Francis Hospital, St. Agnes Academy and St. Dominic School, Christian Brothers High School, and Christian Brothers University, acted as an advisor to priests and bishops, and twice served Christian Brothers University as acting President. He was even recognized as an Affiliated Member (AFSC) by the Institute of the Brothers of the Christian Schools. He received many honors and awards, most notably, the Pro Ecclesia et Pontifice Cross by the Vatican in 1999. Of the honors bestowed upon him, the two of which he was most proud were Dad and Grandpa. His business acumen was also seen across the city and southeast region in his development and management of motels, hotels, and shopping centers. He is preceded in death by his beloved wife, Kathy, and his brother, George. Lance leaves four children: Lance Jr. (Mary), Margaret Hagey (Tommy), Andrew (Trish), and Marie Smith (John Henry). He also leaves nineteen grandchildren, three grandchildren-in-law, and four great grandchildren, as well as longtime family friend Shirley Senko. The family extends a special thank you to his caregivers: Evlean Colyer, Jewell Nelson, Viola Hyde, and Vernida Gary. Visitation will be at the Cathedral of the Immaculate Conception Tuesday, June 22, 5-7pm with a rosary at 6:30pm. Funeral Mass will be held at the Cathedral of the Immaculate Conception Wednesday, June 23, at 10 am., with private burial to follow. Memorial donations in memory of Lance may be made to CBU, CBHS, SAA-SDS, or Camp Marymount.

The family of Harold Lance Forsdick Sr. created this Life Tributes page to make it easy to share your memories.

Send flowers to the Forsdick family.